Reflections on Women and Modern Industry; The Washing Machine 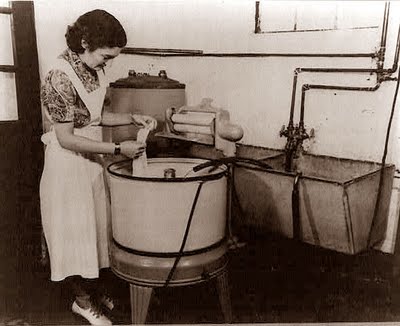 I remember when my grandmother got her first washing machine. She was very happy but she didn’t want to use it.  She did not want to break it because it was very expensive and we did not have a lot of money at the time.  She really took very good care of it. I remember her washing a lot of clothes when we didn’t have the washing machine. I just used to try and help her with the clothes but because I was small I did not wash the cloths well so she still had to wash after me. But now she has more time to go to school because she loves to

learn. She loves to read.

In El Salvador it is not common that people have a washing machine in their houses. I think this is because they are very expensive. In some places there is a shortage of running water, and it’s not necessary because we have a good warm climate. In my house growing up we did not have a washing machine. I think that the first time that I saw a washing machine was here; in the United States. They have had to teach me how to use it and it’s so awesome because a machine can do that job for you. But,  the progress of industry is not for everyone. For example my grandmother does not like to use these machines because she says that they do not wash well the clothes. However, over time everything is modernized. For example my aunts have washing machines now, so for my cousins it will not be impressive to see these machines.

The History of the Washing Machine

The power Machine changed everything in the world, a lot of people might still not have it but the industry has changed over time and the economy too so people can afford to have it. Electric washing machines did not become popular until the 1950s.  Since then they have been selling a lot and they have changed over time to a modern look and better.  Some people like Swedish scientist Hans Rosling in the video below have used the rate of washing machine ownership in the world as an indicator of the rising standard of living that has resulted from the growth of industry.