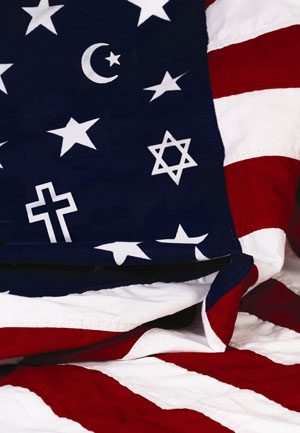 The United States is a country with a very diverse culture of religious beliefs and practices today. In this country all religion can be practiced freely. Most Americans still call themselves Christians but a growing number are beginning to identify themselves as no religion. Religion plays a very important role in many American peoples’ daily life. Religion also played a big role in American History; Many immigrants that came during the earliest 16th, 17th and 18th centuries came in search of religious freedom.

So why is Christianity the largest religion in America?

The first Europeans that came to the new land were protestant Christians that denied the authority of the Roman Catholic Church or its head bishop in Rome ( The Pope).However others like in the colony of Maryland were Catholics that still respect the Pope’s power.   The first settlers in Virginia were of the Church of England and loyal Christians under the British King James.  The Puritan pilgrims in Massachusetts came for religious freedom but they were not very tolerant of others.   People in the Mid-Atlantic  were Quakers. The mid-Atlantic region had a more diverse population and were more tolerant about religion.

Almost 70% of the population in the United States are Christians (45% are protestant and 25%  are Catholics). Only 6% of the population are either Islam, Jew, Buddhism, Hinduism or practice another types of religion. The first British colonies in the new world were Either protestant or Catholics. . Although  Religion is important in  United States; The Government is not allowed to have a preference of one religion over another. The first Amendment of the United States constitution prohibits the making of any law respecting and establishment of religion, impeding  free exercise of religion, abridging the freedom of speech, infringing of the freedom of press,  and interfering with the prohibiting the petition for a governmental redress of grievances.

Congress shall make no law respecting an establishment of religion, or prohibiting the free exercise thereof; or abridging the freedom of speech, or of the press; or the right of the people peaceably to assemble, and to petition the Government for a redress of grievances.  – 1st amendment US Bill of Rights.

Religion has always been a big part of my life. I grew up believing that there is a heaven but also a hell. I learned that we all are sinners in the sense that nobody is perfect.  Because of that Christians believe that Jesus Christ, the son of God, came down from heaven into the Holy Family of Mary and Joseph to save the world. I don’t consider myself as a very religious person in the way of religious actions but I do believe that there is a creator who wants the best for creation (humanity). I have a very religious family but they are not as tolerant as religious. They  say that Christianity is the right religion to follow and the only one that can take you to heaven. Well, I found it so difficult to understand because Christianity is just the religion; a language for humans to understand a larger spiritual truth that includes all humanity. And we all know that religions are all created by humans not by God. In my point of view, religion is what separates the people and creates differences between them. There are many religions around the world. Some of them are similar but others are completely different. But they all might take you to heaven if you practice it correctly. Religion can be solution or a problem to people’s daily life. For years, Leaders have used religion as a tool to manipulate people. They have used religions as an excuse to take people money  or properties.  Even today, there are still ignorant people that let religion ruin their life. Religion might be good if we know how to practice it.