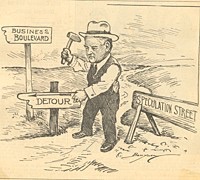 The stock market crashed in October 1929; it uncovered many weaknesses in the American economy.  This lead to the great depression. In 1932 nearly 25% of American workers were unemployed; the charities could not help all those who were in need. Most cities gone bankrupt and created poor funds to help. By 1933 more than a million Americans were out of work, businesses failed, and a number of farm foreclosures grew.

President Herbert Hoover had a strong belief of the limited role of government. He thought government should not step in to help. Hoover led charities to help. He responded to the economic crisis with a goal of getting people back to work. While the great depression worsened, Hoover tried many new ideas like RFC (Reconstruction finance corporation), NCC (National Credit Corporation), Emergency Relief and Construction Act. However the NCC allowed difficult banks to lend money but failed the nation’s needs. Same for the RFC failed to increase the amount needed and the economy continued its declined.

Hoover wanted private for charities and resources to hold the crisis. Even with the efforts to the economy; the public blamed him for the Great Depression. The republicans lost control of both the Congress and the White house for two decades.

Later on Franklin Roosevelt (FDR) was elected and followed by his promises he brought the New Deal in 1932. He let legislation rescue the banks, industries, agriculture and provide jobs for those unemployed. He increased government spending.