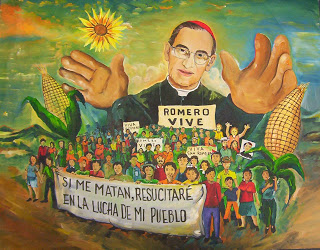 As a Catholic priest Romero led the hearts of the people of El Salvador.

In this headquarters he began to approach the difficult political situation in his country, where for decades the Army had ruled. He was fully involved in the matter once he was named archbishop of El Salvador in 1977: his repeated denunciations of military and revolutionary violence, which went as far as the murder of priests, gave him an important international prestige.

In this era, according to the legacy of the plants, and the cultivation of them.He was fully involved in the matter once he was named archbishop of El Salvador in 1977: his repeated denunciations of military and revolutionary violence, which goes as far as the murder of priests, gave him an important international prestige. This did not prevent the day after he delivered a homily in which he asked the soldiers not to kill, he would be killed by a sniper while a mass was celebrated.

Óscar Romero was the son of Santos Romero and Guadalupe Galdámez, both mestizos; his father was a telegrapher by profession. He studied first with Claretians, and then he entered very young in the Minor Seminary of San Miguel, capital of the homonymous department. From there he passed in 1937 to the Colegio Pío Latino Americano in Rome, where he trained with Jesuits. In Rome, although he did not get a degree in theology, he was ordained a priest (1942).

Thus, when on February 8, 1977 he was appointed archbishop of El Salvador, the successive expulsions and deaths of priests and lay people (especially that of the priest Rutilio Grande) convinced him of the iniquity of the military government of Colonel Arturo Armando Molina. Monsignor Romero asked the president for an investigation, excommunicated the culprits, held a sole mass on March 20 (attended by a hundred thousand people) and decided not to attend any meeting with the government until the murder was clarified (as made at the inauguration of President Carlos Humberto Romero on July 2). He also promoted the creation of a Standing Committee to ensure the human rights situation.

In the course of his Archbishop’s ministry, Archbishop Romero became an implacable protector of the dignity of human beings, especially of the most dispossessed; This led him to undertake an attitude of denunciation against violence, and above all to face the face of regimes of evil.

His homilies become a mandatory event for the whole country every Sunday. From the pulpit he illuminated the events of the country in the light of the Gospel and offered rays of hope to change that structure of terror.
The first conflicts of Monsignor Romero arose in a root of the opposition brands that his pastoral was in the economically powerful sectors of the country and joined them, all the governmental structure that fed that institutionality of violence in the Salvadoran society.

Monseñor Romero became “Voice of the Voice sins” and in the “Shepherd of the flock that God had entrusted to him”.

After the murder of his colleague and good friend, the priest Rutilio Grande, Monsignor Romero cites the teachings of his favorite father, Pius XI: “The mission of the Church is not from the last policy, but when politics touches the altar, the Church defends the altar. ”

Who was Monseñor Oscar Arnulfo Romero?

Monseñor Romero was a Salvadoran Catholic priest, fourth metropolitan archbishop of San Salvador. He was characterized by being a tireless fighter of human rights.

What were the teachings of Monseñor Oscar Romero?

He denounced numerous violations of human rights and publicly expressed his solidarity towards the victims of the political violence in his country. His murder provokes international protest in demand of respect for human beings in El Salvador.

What is their main religion and why?

Monsignor Oscar Arnulfo Romero trastocó borders and besides being recognized as an important religious leader, lives in the historical memory of a country where injustice and impunity persist.

How does their religion help the poor people of their country?

Romero is an example to imitate of love for the poor and for all his people. Defending the poor was found between two violent fronts: the government, with its responsibility to the “death squads” and the military, on the one hand, and the guerrillas on the other. «There is Christian forgiveness. Enough. Stop, “he said to some and others. He was a man of prayer who always condemned violence.

When was the Civil War in El Salvador and what caused it?

EL SALVADOR, San Salvador.- Defenders of human rights and close to Monsignor Óscar Arnulfo Romero says that the archbishop, murdered on March 24, 1980, was the “anchor” that prevented El Salvador from setting sail on a journey of blood and pain that, in the end, would cost the lives of some 75,000 people in 12 years of civil war.The biographer and former personal secretary of Oscar Arnulfo Romero (197-1980), Monsignor Jesús Delgado, assured that the archbishop was trying not to have a civil war in El Salvador.

“Romero was detained, saying that he had not spent the last cartridge of the reason, that the word still had a force to free this country from so much oppression, rancor and hatred because it was not only an economic, social situation and politics, it was a moral and human situation, “said the priest.

The Salvadoran civil war between the 1980 and 1992 guerrilla war against the Farabundo Marti National Liberation Front (FMLN) and the Salvadoran Army, financed by the United States, caused some 75,000 deaths and 8,000 missing.