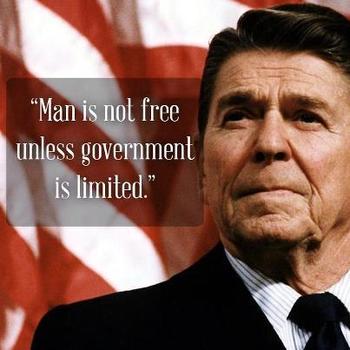 At the end of his two terms in office, Ronald Reagan viewed with satisfaction the achievements of his innovative program known as the “Reagan Revolution”, which aimed to reinvigorate the American people and reduce their reliance upon Government. He felt he had fulfilled his campaign pledge of 1980 to restore “the great, confident roar of American progress and growth and optimism.”

Ronald Reagan won the Republican Presidential nomination in 1980 and chose as his running mate former Texas Congressman and United Nations Ambassador George Bush. Voters troubled by inflation and by the year-long confinement of Americans in Iran swept the Republican ticket into office. Reagan won 489 electoral votes to 49 for President Jimmy Carter. In 1986 Reagan obtained an overhaul of the income tax code, which eliminated many deductions and exempted millions of people with low incomes. At the end of his administration, the Nation was enjoying its longest recorded period of peacetime prosperity without recession or depression.

He was friendly, concerned about the well-being of everyone in America. He had charisma, character, and he was teachable and responsible for any mistake he made and was willing to learn how to correct them. He brought down tax rates for all citizens, which increased revenue and allowed citizens to invest more in their country.

We led the world with the highest standard of living and an extremely low unemployment rate. He was an honest man who knew that the sanctity of trust, and persistence to see the task finished was what made a good man. He saw everything he started through the end, and corrected it as needed.

Often good leaders like Ronald Reagan have basic good human characteristics and skills that anyone could imitate in their own lives.  President Reagan wanted the government to protect the individual freedoms that allow us all to become better people together.