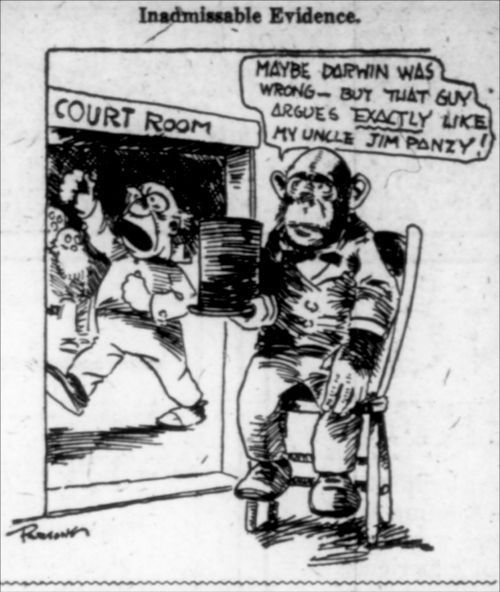 This 1925 cartoon shows the changing thought about teaching Charles Darwin in the Science classroom.

The history of science and technology in the last 100 years is remarkable.  Mankind has been constantly developing science and technology but in the last 100 years the pace of discovery has caused a social conflict with the more traditional ideas of the past. We can now copy living things into clones. Every advancement brings a challenge. We are faced with new problems as we are able to use science for biological cloning.  There are many moral questions about the science of creating new human life.

In 1997, cloning technology in Edinburgh, Scotland made a big breakthrough.  Fertilized sheep eggs could be copied without limit to the number.  This produces a large number of copies of the product without the mating between male and female or male semen available.   With this new possibility the question of human cloning is being debated  in the world.  It brings legal and moral questions into the practice of science.  Every new scientific and technological discovery in our history seems to also require new laws and new ways of thinking.  This was true over 100 years ago during the Progressive Era when new social laws were passed to protect workers’ rights and improve the harmful environments of new technology and industry.

There is always a chance to cause unexpected side effects with human cloning. On the other hand, it may help human life and treatment of physical and mental pain.  Scientific innovators need to see beyond the human limits with a vision of future problem solving.

An example from the late 19th and early 20th century of ideas of human science coming into conflict with the traditions of the American people can be found in the story of the 1925 Scopes Monkey Trial. In this trial a Tennessee substitute school teacher was accused of wrongly teaching the theory of evolution in the public school classroom.  This small town of Dayton, Tennessee made it into a controversy so that the debate between religious ideas of creation and scientific ideas of creation could take place publicly in a court room. Since it was the 1920s time period of change, the whole nation tuned in on the new media known as radio.
Is the issue of human cloning a result of teaching new advances and understandings of human biology? What do you think?  How has America changed in its attitudes of religion and science since the days of the 1920s Scopes Monkey trial and how has it stayed the same?

All history themes of GRAPES are present here but the most important themes include Religion – Politics – Society  and Artifacts of scientific thinking.

A first reason, in christian belief, one god created man, human life is doctrine of the creator of the unique areas but human cloning reported as an insult and a challenge to the act of artificially manipulate human life to God. In the Buddhist perspective, an act of cloning a providence destroy the Dharma of the universe and it would lead to enormous complications, including ecosystem destruction. There are ethical concerns that human cloning would make weak human dignity. If human dignity is the life and personality that absolutely shared by based on the fact that the only universe. But the human cloning will shake that theory from the root. Human cloning  possible objection with question such as an “does exactly the same as the original?”, but the fact itself that individual human life until now been considered a sacred human operation is formidable claim that undermine human dignity. In addition, because it is clear the number of embryos to be cloned human embryos are sacrificed in the research and treatment process, which also runs counter to the dignity of human life is also claimed.

A second reason, the biggest problem is that the current legislation all the judicial community based on kinship and family will fall into chaos. First, it will see how the issue of the legal status of a human being. What is a clone of my father, uncle to me, father’s brother to me, or rather what, nothing? This is based on current legislation in marriage and family institutions just can not be solved problem here affects far beyond all laws relating to inheritance and insurance institutions such as kinship. Another human liberty and equality guaranteed by the Constitution, if a cloned human being that presupposes the unity and homogeneity of the human species emerged also fall into chaos. In addition, the legislation will also be related to pregnancy and childbirth, abortion and penal act cap will also be difficult to apply.

A third reason, if human cloning is possible, marriage and family system underlying the current human society face a serious crisis. the relationship will fall into chaos, will be sure to make the various forms of the family appeared because the married or have a baby without a man and a woman or a single band homosexual couples will be able to become parents. Also, because they are going through a cloning technique to give birth to babies with better traits as possible to become a parent might arise a new eugenic discrimination and social classes accordingly. This situation will be a factor of serious social unrest. Furthermore, the possibility also exists that human society usually be divided into two classes of human being and human cloning. In addition to traditional gender roles and gender concepts it will also undergo a major transition.

Here is a video about human cloning exist and history.