Sectionalism: Before and After the War

Since the constitution there has been a division existing between northern and southern states regarding slavery and the power of the federal government. During the civil war the northern states were called the union and the southern, the confederate. They were divided over disagreements about tariffs, slavery expansion, and debate over rights of the states. For Southerners, Slavery and the nullification of Federal trade tariffs were the main reasons why they withdrew from the United States after Abraham Lincoln was elected President in 1860.  People in the southern states were afraid that President Lincoln would abolish slavery.  Lincoln felt that it was important that states should be united as one nation and that if the southerners didn’t want to obey then force would be used against the confederacy.

When South Carolina seceded from the Union in 1861 Lincoln sent supplies to Ft. Sumter; which eventually the Confederacy attacked from the trade city of Charleston, S.C. Battles took place throughout 1861-1865 until the surrender of the Confederate General Robert E. Lee to the General Ulysses S. Grant at Appomattox Courthouse in Virginia in April of 1865.   It killed over 600,000 soldiers yet the Union States had won the war and Lincoln’s goal of keeping America united was accomplished.

From the White House he told the crowd “I can only trust God I have made no mistake… It is now for the country and the world to pass judgment on it.” Lincoln issued the Emancipation Proclamation which freed the slaves forever and made the abolition of slavery. He issued the Emancipation Proclamation on September 22 1863. The important result of the war was freeing the slaves but it did not happen fully until the 13th Amendment ratified during the Reconstruction era after Lincoln’s death.  Southerners had no longer slaves as work force. The farms, towns and cities suffered losses from the war and the South’s economy was totally destroyed.  The unequal economy of North and South remained as a form of sectionalism into the 20th century.

Abraham Lincoln, the 16th president, got assassinated by John Wilkes Booth at Ford’s theater in Washington, D.C. in April 1865. Lincoln had true beliefs that all states should stay in one nation. He wanted to welcome the confederate states with leniency for his plan of Reconstruction.  After Lincoln’s death the nation was still divided and Reconstruction took much effort.  It had some successes as well as failures.

Today we are still searching for a “more perfect union” in the United States. 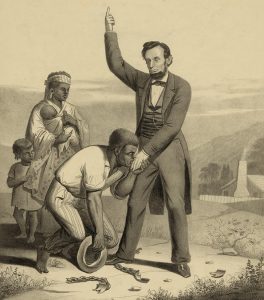