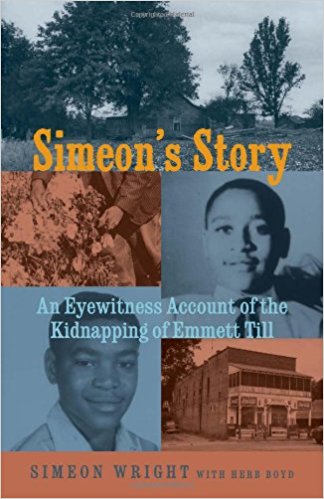 Simeon’s Story is a book that shows us what the black people had to go through in the past and how we can compare with the reality of our time now. Racism in America still exists but this story shows how ugly it was when there was no justice. It is important today to remember the injustice of yesterday because we need to overcome the fear and judgement of others.  Emmett Till was being judged of an action he did not do.  The white men were blind to the humanity of the black men.  They felt the power to judge, kill, and lie about what they did.  It was not until 2005 that any justice began to come.  We need to remember the ugly crimes of the past so that we can do something about it today.

Emmett Till was an African-American teenager who was killed in Mississippi at the age of 14 after whistle a white women.  Emmett or Bobo that was how his family and friends call him, he came to spend some days with his cousins and family in Mississippi.

On Wednesday, August 24, day Bobo and his cousins  were  in Money, a small town in Mississippi and he goes to the Bryant’s grocery, Wheeler went in to buy a pop or some candy. Bobo went in after him; Them Wheeler came out, leaving Bobo in there alone. Maurice immediately sent Simeon’s into the store to be with Bobo. For less than a minute he was in the store alone with  Caroline Bryant the white women who work at the cash register,  while Simeon’s was in the store Bobo did nothing inappropriate. Her husband was the owner of the grocery. After some minutes when Bobo and his cousins were outside of the grocery the women  walk out of the grocery and Bobo whistle. All the cousin of Bobo know that he make something wrong so  this make all of them  worried because in this time period the black people couldn’t do anything like this to a white women.

They ran into the car and run away. Bobo and His cousins agree in don’t tell anybody about what happen in the grocery with the white women. Two days pass when at 2.AM  they start hearing someone coming from the front porch. A man called out, “Preacher, Preacher.” Then Simeon’s dad go out and ask who is it? and the man responded, “This is Mr. Bryant. I want to talk to you and that boy.” When he open the door he saw two white men standing on the  porch. One of them – J.W. Milam. After some minutes they ask for Bobo and they take him away from home. The days were passing when in the third day Bobo  has been founding in the Tallahatchie River.

The trial starts and the two men who kidnaped Bobo were there. The day passed all the witnesses who were there and then the decision was made the two murders were declared NOT GUILTY.  After this decision things changed for the family.

What does this book do for the reader today?  How can we act to end racism today?

Reading this book  I can have a better point of view and how was live in the United States for the black people in this time. In my opinion we still have a long way to go about racism. I don’t think we have solve all the injustice and racism in this country. Now we can see after President Trump won the election a lot of bad things start happen people get kill just because they don’t thing they belong here. Immigrant person is suffering discrimination for the President and for a lot of the people who live here.

To end up racism we all have to think that in some way we all have suffer the same or some people more. Teach our children that all people are  the same no matter how they look.  Why we have to see other people different from us just because they skin color? Just because they born in other country?

Below is a link to the African American History Museum and its coverage of the story of Emmett Till.  https://nmaahc.si.edu/search/node/emmett%20Till