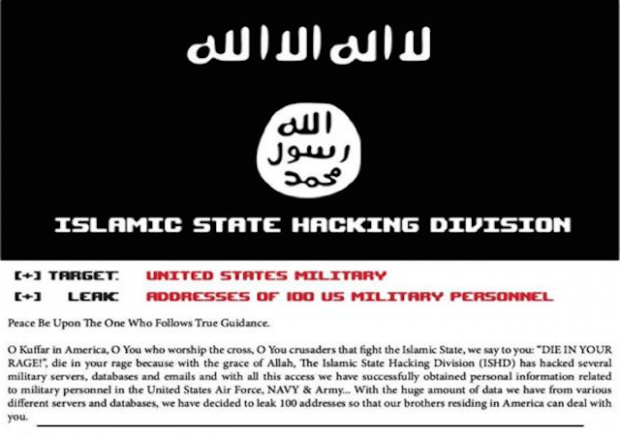 Personal information such as pictures, home addresses, and phone numbers of about 100 United States Commanders, Captains, and Major Generals of the U.S. military was posted on Twitter by a page named the IS Hacking Division.

Other posts such as “kill them in their own lands, behead them in their own homes, and stab them to death as they walk their streets thinking they are safe” were posted as well. These posts could deeply jeopardize the security and safety of all those listed and could have drastic consequences if action is not taken. Officials also say a few of the individuals in the group were ISIS affiliates and have been on the FBI`s radar for a while now. It is still unclear whether or not this list was posted by ISIS leadership or by an individual associated or sympathetic with ISIS.

Things must be done for these people to insure their own safety, some may even have to move out of their homes. These people are all being advised to clear their public personal data because this list was compiled almost all from available data public on social media.

I think if these troops want to be secure and provide for the safety of their family and themselves they should be discreet on information they are making available. Even sometimes if you do not make it publicly available hackers may still be able to access information on you from other sources so you must make sure that your online records are clean and nothing is readily available if someone needed or wanted to find you or your family for a reason of threat or harm. These people must be very careful in case ISIS members or supporters take action upon this hit list and start causing violence to these troops.