Stand Up! A Citizen Coach in the NBA 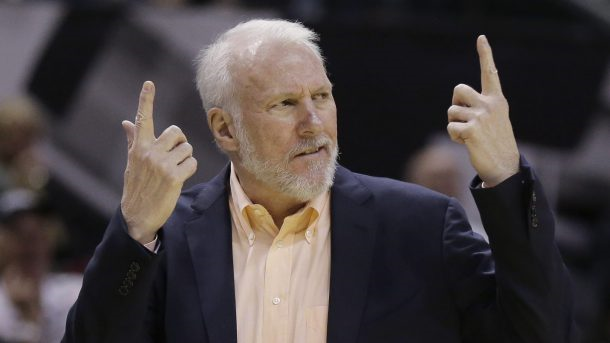 Gregg Popovich is a famous NBA coach who may himself get elected even though he’s not running for public office. Normally sports are kept away from politics, but lately people in sports have been speaking out. Not only one organization but multiple. People are starting to stand up for what they believe in and not the other bs****. Do to that players and coaches are starting to protest. Collin Kaepernick was the first of few that stood up for equality. He believed that everyone should be handled the same.  Collin started a trend by taking a knee during the national anthem. This act was seen by some as disrespect but actually it was a way of him showing how he felt.

Gregg Popovich, attended the Air Force Academy, where he graduated with a bachelors degree in Soviet Studies. Popovich served five years of required active duty. He spent most of his time traveling to different locations. He was selected as captain of the Air Force Academy witch he won and earned a chance to go to the Olympics. He then went on to coach as an assistant coach position and then coaching for the spurs. In his history of coaching for the spurs he have won 5 championships.

Americans have the right to speak out, which relates to the first amendment . But in this case he was speaking for many because of the public image he has and the notoriety it would get. Many would agree with what coach pop had to say and others wont. On may occasions Popovich has spoken out on political activities. He may be a basketball coach but he is also a social leader who speaks on behalf of many social groups.