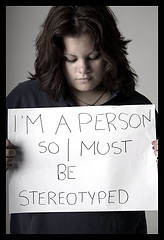 When dealing with stereotypes you first have to understand what a stereotype is. A stereotype is a generalization about a person or group of people based off of minimal information due to the inability or unwillingness to obtain information to make fair judgments. Stereotypes affect everyone regardless of social status, race, sex/gender identity, etc. Societies often subconsciously create stereotypes to differ from friend or foe. We live in a world of survival of the fittest as a species hard-wired to make quick judgments of our “predators.” In the past psychologists used to believe that only racist, sexist, or bigoted people used stereotypes but this has since been denounced. The brutal truth of the matter is that everyone uses stereotypes all the time. It is known as Automatic or Implicit Stereotyping in which we make subconscious biased conclusions about a group of people. For example: If someone was walking down a street at night and was approached by a man in a leather jacket they would be inclined to feel threatened more than if it were an elderly citizen with a cane.This is because as a society we have generalized senior citizens as being delicate, weak, and helpless.

Our first and most influential teachers are our parents and they play a major role in learning to stereotype and profile individuals. Other contributors include friends, significant others, music, and the media. Another explanation for how we develop stereotypes comes from research in cognitive psychology. As a species we have developed a habit of categorizing the world. We categorize the social and physical world because it is cognitively efficient, once you have categorized you no longer need to consider information about each individual member of the group. This process also helps satisfy the need to understand the social world and help us feel better about ourselves. The In-Group Favorability Bias is the tendency to think your group is better than the others (Out-Group’s). Although research supports common sense, it is still not the whole story.

The film Crash accurately portrays stereotypes in the real world and how they are harmful to society. Daniel Ruiz, the locksmith, encountered racial discrimination openly while working at the Cabots house. Mrs. Cabot became increasingly angry with her husband, the District Attorney, claiming that he is not being cautious enough after they got their car stolen. She continued to say that the Latino locksmith was a gangbanger with his tattoos and he would probably sell their house key to his “homies.” This kind of stereotyping was also present when Ruiz was fixing Farhad’s lock. Ruiz said that he needed a new door but Farhad insinuated that he knew someone who sold doors and he was “cheating” him. However, racial discrimination and stereotyping was present in all of the characters in the movie. Even the “good cop” made a snap judgment when Detective Waters’ brother got in the car with Officer Hansen. They broke into an argument and Peter (Det. Waters’ brother) reached into his coat and Hansen (good cop) shot and killed him and ditched his car. This was based off of Hansen’s instinct, he thought that Peter was reaching for a gun when he was actually reaching for a religious artifact that he carried with him. Maybe Hansen was making a generalization that hitch hikers or people of color are dangerous and carry weapons, but that is not always the case.

The social harm of stereotyping can have a tremendous negative affect on society and children especially. Since stereotyping simplifies social reality it has very harmful effects on how we perceive and treat others. This is how discrimination in labor markets and the social realm are created. Discrimination and stereotyping effect everyone in the world whether you’re African American, Hispanic, gay, transgender, female, tall, overweight, or have too many tattoos and it is a problem now more than it ever was.