Struggles for justice in Honduras 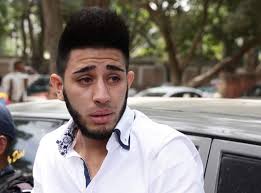 Small countries like Honduras are really corrupt in terms of our government. From time to time it looks like instead of fixing the problem the politicians are just making it worse. These days there is nobody that the people can trust in the government, there are ones that fight or tell them the true, but they live in danger and often just appear dead days later with no explanations and no further investigations. All this is making Honduras not no be able to become a better or more advanced country. Here is the story of Kevin Solorzano that went viral in Honduras because of the unfair judgement from the main judges that were following the case of this young student, people became crazy and started protesting and asking the US for help so it can be a fair judgement.
In late 2014 Honduran news outlets like La Prensa began reporting on the murder of a former attorney who worked with the Honduran “Public Ministry”. His name was Edwin Eguigure. Older articles in Spanish talk about the act being committed by two people who intercepted Edwin and his family as they were talking from their home to their car in their community, a small area named El Chimbo. Edwin was walking his family to their car, located right outside of their home when they were cut off by two people who immediately attacked Edwin, one of them stabbing him and the other shooting him. Kevin was arrested just days later on November 20th 2014  and that would begin a long-lasting legal battle that reached its end about three weeks ago.
This isn’t the end of the story, but I’m getting ahead of myself.
Prior to his arrest, Kevin Solorzano was a college student. Kevin is the youngest in his family. His older sister named Melissa Hernandez has been one of his most charismatic supporters and is one of the leaders of the groups that seek to see Kevin freed. Kevin also has an older brother named Jose Luis.

So Maria Auxiliadora Sierra is the widow of Edwin Eguigure. One of the leading theories among people who insist that Kevin is innocent is that Maria herself ordered the murder. This is a wild theory, but one that at least had some public support for a while due to controversial testimonies by figures who claimed that Kevin had nothing to do with the murder of Edwin and that they had been paid 600,000 lempiras (25,433 dollars in today’s exchange rate) by Maria to kill her husband. Maria insisted that she could never forget the face of her husband’s killer, despite evidence to the contrary on an objective level. This is also despite the fact that older articles mention that it was two people, not three, who according to witnesses murdered Edwin. For whatever reason the only witness testimony taken seriously was Maria’s, which on a basic level is understandable but still frustrating given the discrepancies between the original witness testimonies and the second set, especially the two killers vs three killers.

Part of the video drama surrounding this trial is that there is a video which appears to showing Kevin Solorzano at his university the same day and at what might well have been the same time Edwin was being killed according to accounts given by witnesses of the crime.
Why Should You Care?
Honduras’s legal system is dangerously broken. This is part of why people flee Honduras, both with and without documentation. Kevin’s family reported receiving death threats, as did Kevin’s lawyer. At the time of Edwin’s death Edwin was one of 84 lawyers killed in Honduras between 2010 and 2014. In 2015 the lawyer of Lena Gutierrez (One of the vice-presidents of the Honduran Congress) was murdered during the worst days of the fallout of the IHSS scandal in the days leading up to her trial. In Honduras even the lawyers themselves are in constant danger, as are the journalists, students, and virtually every member of society aside from the people at the VERY top. When people flee from Honduras this is part of why they flee. Many Hondurans feel that they lack opportunities and live in a country where if they are murdered their murderers won’t face justice.

This disaster of a legal battle wasn’t talked about in English. Not by anyone aside from myself, as far as I know when it comes to posting articles. Not even TeleSur English reported on it. It’s important that people in the United States understand the complex realities of life in Central America and come to understand why people flee. People in the United States need to know what drives people to flee and come to a country where the President will vilify them. And when even lawyers are in constant danger of course people are going to flee. Part of the problem is that the media of the United States is not interested in talking about injustices Hondurans have to face. The media doesn’t want to devote time to talking about the death threats faced by a family that wasn’t already famous, like it has when it came to the death of Berta Caceres. Providing coverage of a non-famous Honduran doesn’t seem to be something that the English media has time for.

I want people to care about Kevin Solorzano. I want his story to fill people with frustration. I want people to understand why people come from places like Honduras seeking a better life for themselves. It makes sense, even if its not pleasant. We need to talk about Kevin’s story and so many more.

I provide translations of news articles from Honduran sources on Facebook and on Weebly. If you want to be kept informed as to events going on in Honduras, come check out The Honduras Report. I would love to help keep you informed!

Support Hondurans made mad by this injustice. Talk about Kevin Solorzano yourselves. Learn what happened to him and why he has spent the last two years imprisoned. Be mad. This is frustrating stuff. It’s okay to feel bad because of this. We need to stand in solidarity with the Hondurans all over the world who are discussing this injustice.
I personally don’t really know if the guy is guilty or not; but based on the proofs that the defense has given I think they should reopen the case and review all the evidence. People from all over Honduras have been protesting because it is a topic that become viral because it shows how much failure is in the Government and how everything works from inside. Some people say, Why do all of you care? He isn’t even related to you! mind your own business.

The answer for those questions is that “tomorrow it could be you”. Because of corruption like this in Honduras, many innocent citizens are asking for the help of the US government to interfere in this “case of impunity”.