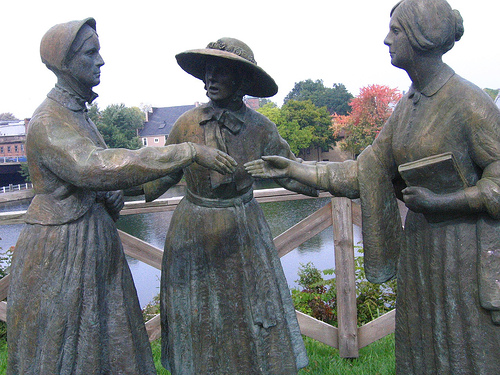 At the same time the abolitionist movement grew, another reform movement took root, to give equal rights to women.  The Seneca Falls Declaration – the document, authored by Elizabeth Cady Stanton, was presented at the Seneca Falls Convention.  It was the grand basis for attaining the civil, social, political, and religious rights of women.  Susan B. Anthony, another supporter of women’ rights, became involved in women’s suffrage before the Civil War, and continued with the movement after the war.

The Westward Movement and Economic Development

American settlers streamed westward from the coastal states into the Midwest, Southwest, and Texas, seeking economic opportunity in the form of land to own and farm.  The growth of railroads and canals helped the growth of an industrial economy and supported the westward movement of settlers.  Eli Whitney’s invention of the cotton gin led to the spread of the slavery-based “cotton kingdom” in the Deep South.

American migration into Texas led to an armed revolt against Mexican rule and a famous battle at the Alamo, in which a band of Texans fought to the last man against a vastly superior force. The Texans’ eventual victory over Mexican forces subsequently brought Texas into the United States.

The American victory in the Mexican War during the 1840s led to the acquisition of an enormous territory that included the present-day states of California, Nevada, Utah, Arizona, and parts of Colorado and New Mexico.

Questions according to the reading

What new technologies helped the growth of an industrial economy and supported the westward movement of settlers?
For what purpose did American settlers stream westward?