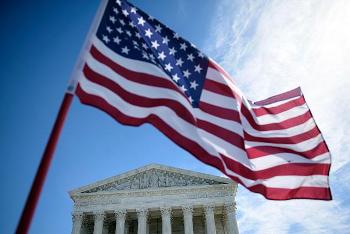 The Supreme Court currently has 8 justices with the 9th seat vacant due to the recent death of Justice Antonin Scalia.  This has not stopped the court from hearing cases.  A recent case from March 2016 known as Caetano v. Massachusetts unanimously protected the right to carry a stun gun in public for self-defense purposes.

This case involves a girl who has an abusive ex-boyfriend.   when he continuously beats on her. In Massachusetts the girl defended herself with a stun gun. The judges issued a court case and claimed her conviction violated her Second Amendment right to possess a stun gun. The Judicial Court agreed that it was necessary for her to protect herself.

But the real is question is: Does the Second Amendment protect the right to possess a stun gun for self-defense?

Justice Samuel A. Alito summarized the situation with these words:
After a “bad altercation” with an abusive boyfriend put her in the hospital, Jaime Caetano found herself homeless and “in fear for [her] life.” She obtained multiple restraining orders against her abuser, but they proved futile. So when a friend offered her a stun gun “for self-defense against [her] former boy friend,” Caetano accepted the weapon.

It is a good thing she did. One night after leaving work, Caetano found her ex-boyfriend “waiting for [her] outside.” He “started screaming” that she was “not gonna [expletive deleted] work at this place” any more because she “should be home with the kids” they had together. Caetano’s abuser towered over her by nearly a foot and outweighed her by close to 100 pounds. But she didn’t need physical strength to protect herself. She stood her ground, displayed the stun gun, and announced: “I’m not gonna take this anymore…. I don’t wanna have to [use the stun gun on] you, but if you don’t leave me alone, I’m gonna have to.” The gambit worked. The ex-boyfriend “got scared and he left [her] alone.”
And finally after endless court dates the Supreme Court did not even argue the case but made a decision that reversed the Massachusetts court decision that prohibited the use of stun guns as a protected weapon under the 2nd Amendment. It issued “a contemporary” and found nothing in the record to suggest that stun guns were used in the military and that they were reasonably protected under the 2nd amendment right to self defense.

The Court has held that “the Second Amendment extends, prima facie, to all instruments that constitute bearable arms, even those that were not in existence at the time of the founding,” and that this “Second Amendment right is fully applicable to the States.” In this case, the Supreme Judicial Court of Massachusetts upheld a Massachusetts law prohibiting the possession of stun guns after examining “whether a stun gun is the type of weapon contemplated by Congress in 1789 as being protected by the Second Amendment.”