Teen Dream Crushed because of Deportation. 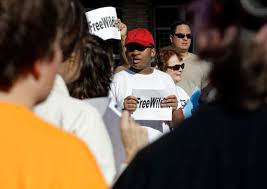 Wildin Acosta says if he gets deported to his home town in Honduras he is risking death. About 50 people showed up to support Acosta. Supporters say he went to North Carolina to finish high school. Acosta is 19, a student senior at Riverside High school. Now he is in a rural jail in Georgia. U.S. immigration and customs enforcement issued an order Sunday preventing the deportation temporarily. His attorney filed an appeal that let him have an ICE spokesman.

His disappearance at school has made other teachers and students worried about his absences. Students wants him to return before the fourth quarter starts so he can make it to graduation.
“I believe that his triumph will be that this year he will be able to graduate as a senior with me and all of the 300 to 400 classmates that he has,”
said Axel Herrea a high school student friend.
Acosta left Honduras after gang members threatened to kill him. His dream is to finish school and he doesn’t want things to end this way.

“Teacher Ellen Holmes said Acosta was awakened at 3 a.m. Monday in his jail cell and told he was being deported even though he had been granted the stay”

His teacher says everyday students go up to her and ask “‘where’s Wildin? When’s he coming back? What’s going on with him, Ms. Holmes? What’s going to happen?” She has even said ever since what happen students are scared to go to school and attendance has dropped a huge amount.

“Supporters said Acosta is one of about 800 teenagers who arrived in the U.S. as unaccompanied children and have been detained or deported by U.S. Immigration and Customs Enforcement since October. They also rallied in support of five other North Carolina students they say are being detained and threatened with deportation.”
I don’t understand why the government will deport people in the right path but not try and get the ones who have been doing wrong.
Even Rodney Ellis; president of North Carolina association of educators said that Acosta and five other students, “are not a threat to our schools. They should not be sitting in a jail cell. They should be in a classroom, not only learning about math or science but about problem solving and being a valued member and contributor to our society. ”
For the latest information on this story click on the links below: