What do recent actions from Kim Jong-Un mean for America? 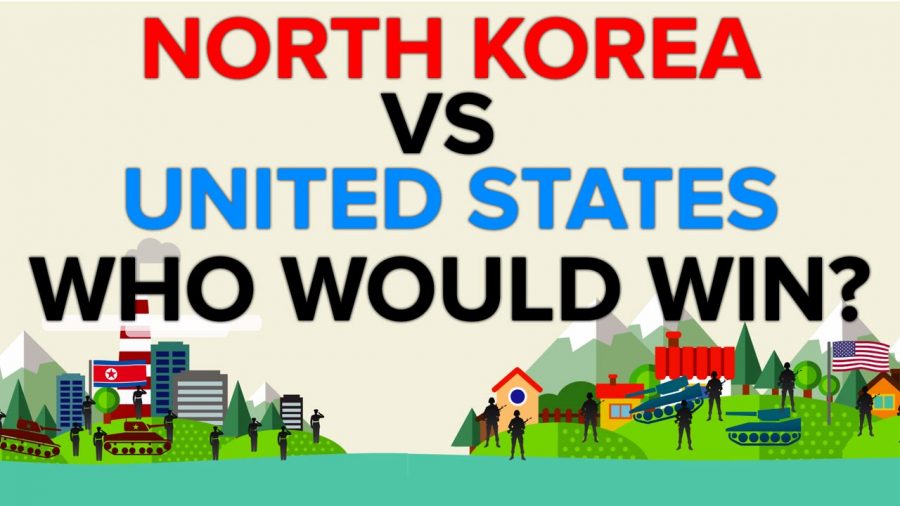 North Korea has recently started to come out of its shell more than ever before seen. In Kim Jong-Un’s annual New Year speech, he addressed both the United States and South Korea, proposing to establish communication and global contributions.

Many issues between North Korea and America have come about due to nuclear missiles. North Korea is a very militaristic dictatorship and because of this, the United States has declared North Korea as a global enemy and keeps a close eye on their nuclear program. This has led to a competition between North Korea and America called the arms race. The goal of the U.S. is to have more nuclear power and might than North Korea so that we can have an advantage over them in the event that war or other conflict breaks out. Up until now, the United States has been calm about North Korea’s suspected nuclear development because they did not have the technology and knowledge to create a missile that would be able to reach America. However, recently Kim Jong-Un declared that they have successfully created a missile that would reach Washington D.C, our nations capital. In fact, the nation had a whole ceremony to celebrate and acknowledge their new military accomplishments. Images circulated throughout the news of images depicting ice sculptures of the ballistic missile. 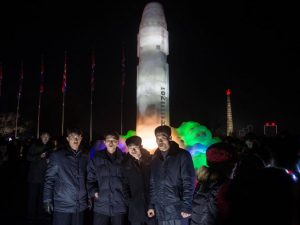 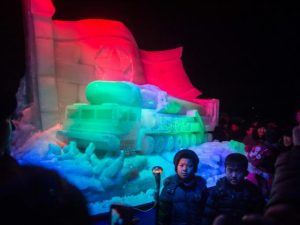 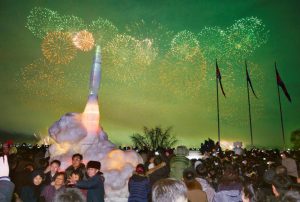 Many families and proud citizens flocked to take pictures and participate in the event, celebrating the missile.

The announce of the missile came shortly after a televised speech that Kim gave, saying that the launch button was always on his desk. He also so said that “This is a reality, not a threat”(Time: Speech Video). The missile has brought about a lot of tension between the two countries because our President continuously tries to make it known that America is bigger and stronger than North Korea, and this eggs Kim Jong-Un to retaliate. Many feel that it is only a matter of time before somebody strikes first. Two recent discoveries about North Korea’s missiles have relaxed the nerves of many Americans. The first is that North Korea’s Missiles were reported to have been destroyed when trying to re-enter Earth’s atmosphere. If a missile cannot enter the atmosphere safely then it is rendered useless. The second discovering happened on April 28, 2017. A Korean missile, thought to have disintegrated mid-flight, was discovered to actually have landed in a North Korean city, destroying part of its population. This makes North Korea seem weaker and inferior to the U.S. So many people are not worried about threats from Kim Jong-Un.

Also in a recent speech, Kim Jong-Un declared that he is interested in communicating with South Korea and its officials. This is the first time North and South Korea have communicated since a meeting in 2015. Kim said that, “the path to dialogue is open” and his goal is to lower military tensions on the peninsula. He is hoping that they can also discuss North Korea being apart of the 2018 Olympics that will be held in South Korea. This seems like a good sign as far as the hostility of Kim Jong-Un goes. Hopefully, his willingness to converse with South Korea means that he is starting to be less of an insane dictator. However, many analysts say that just because North Korea is going to talk to South Korea doesn’t mean we should expect Kim Jong-Un to give up his nuke anytime soon.

We cannot expect any drastic changes out of their country or our own but due to the recent events, I would say that there are definitely new horizons afoot.