The 1856 Caning of Charles Sumner 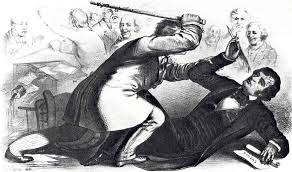 In 1856, there was an issue between whether Kansas should be a slave state or a free state. A Republican Senator named Charles Sumner was against slavery. He didn’t think another member of the House, Preston Brooks was a good representative. Sumner made a speech called “The Crime Against Kansas” that Brooks thought was offensive to his state and old relatives. Two days after Sumner’s speech, Brooks went inside the Senate chamber and repeatedly hit Sumner’s head with a cane.  ( The video link is an attempt to make a tragic event in American history seem funny and may be inappropriate for some audiences.)

When Brooks returned to the south, he got re-elected to House seat and people from all over the South sent him replacement canes which outraged the Northerners more than Charles Sumner being caned. For several years, Sumner was kept away from the Senate because of his physical injuries. Over the next several years, Massachusetts also re-elected him. The caning of Charles Sumner was extremely wrong but it shows how America would soon break out into civil war.