The Bill Of Rights is basically the first 10 amendments of the constitution.  It was written by the James Madison in 1791 in order to re-enforce the checks and balances of power in the US Constitution.  Because of the very weak Articles Of Confederation, Federalist and Anti-Federalists reached a compromise and ratified a new Constitution that balanced power between three separate branches in national and state governments as well as the citizens of all states.
Federalists argued that the Constitution did not need a bill of rights, because the people and the states kept any powers not given to the federal government. Anti-Federalists held that a bill of rights was necessary to safeguard individual liberty.
What is an amendment?

An amendment is a change or and addition to the constitution. The Bill Of rights limits the power of the government over the people and the states.

Several representatives led by roger Sherman, debated against the congress saying that they had no power to change the constitution words it self. James Madison and the Anti-Federalists wrote 17 amendments and only 12 of them became law. Now all those amendments are respected and followed by enforcing authority and all citizens of the U.S.

Below is a link that lists the 1st 10 amendments by topic. 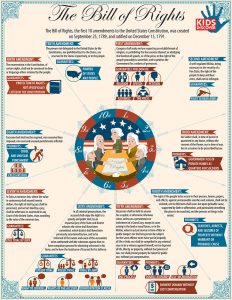 I am glad that the Bill Of Rights was ratified by a people that really saw a need to protect the average American citizen. Upper class people only care about their own good and not for others even though they had more to give they often never did.  I found this Disney version of the first 10 Amendments.  It is entertaining and may help you remember the citizen rights that are protected.