The Bloodiest Day in American History 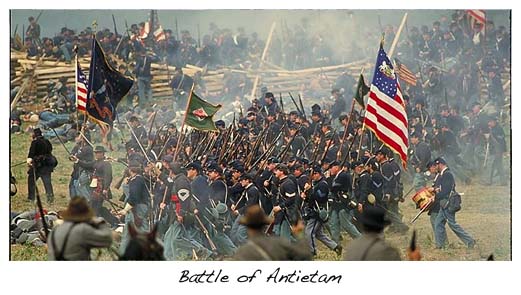 The Battle of Antietam was the first battle in the Civil War to take place on Union soil. It was the bloodiest day in American history because the combined death tally was over 22,000 American soldiers. On the dawn of Sept. 17th, Union Gen. McClellan lead his men after the Confederate army into Maryland and started launching attacks at their flanks. The Confederate army, under Gen. Lee’s command, took defensive positions behind Antietam Creek and were able to hold their positions. Reinforcements arrived for the Confederate army from Harper’s Ferry and launched a counterattack that was able to drive back the Union and end the battle. Although the Union had far superior numbers, they where unable to concentrate the attacks in a way that would cripple the Confederacy. Their attacks failed in destroying Gen. Lee’s army.

I was surprised when I heard that this battle was the single bloodiest day in all of American history. It really took some thought because its hard to believe that through all the other battles in the French and Indian War and Revolutionary War, that Antietam would would be bloodier. I realized that the major difference between this war and every other the U.S. has ever fought is that it is a civil war. Almost all the soldiers fighting in this war where U.S. citizens while the other battles where against other nations. Never before had their been so much American blood been spilled and the worst part is it was self inflicted. Family members where fighting against family member and spilling the same blood which is the worst part to me. I guess some people believed in their cause enough to kill family, but I cant see myself ever getting to that point.