The Business of Imprisonment 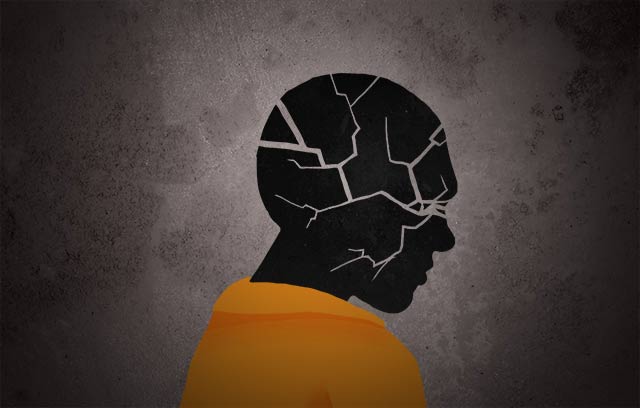 These recent developments coming out of China are very troubling and should have more international attention. The unprecedented, unethical imprisonment and forced labor of Muslims is not something we should be turning a blind eye to. These camps, where they must renounce their religion, make clothes for very cheap or no wages, and have no freedom to move where they want are very reminiscent of the same camps used to imprison Jews during Nazi Germany. Although they aren’t being methodically executed, the Muslims detained in these “camps” deserve some basic human rights and to be freed. But, as we know, China’s economy is just too huge for any country to interfere, seeing as how the U.S. alone owes them about $1.15 trillion.

China is that one jerk friend who is always getting into trouble and doing questionable deeds, but can’t be spoken against because of all the dirt they have on you. It’s time to put politics and money aside to take a hard look at what kind of human rights violations were going to continue to allow. If Trump ever wants to be respected by anyone with half a brain, then he’ll start holding countries accountable for their terrible deeds (which has the same probability of Mexico paying for a ludicrous border wall, seeing as most countries violating basic human rights are either in his wallet or the White House).

Perhaps we also need to take a look at our own criminal justice system, which imprisons 2,220,300 adults, which has similar labor programs that pay prisoners cents on the dollar for the same type of menial, manual labor that manufacture name plates, mattresses, desks, shelving, seating, bookcases and more.

Some prisoners in eight states—Alabama, Arkansas, Florida, Georgia, Mississippi, Oklahoma, South Carolina and Texas—are not paid at all for their labor in government-run facilities. The national average for inmates receiving the least compensation for their maintenance work in these prisons is 14 cents per hour, according to the non-profit Prison Policy Initiative. The countrywide average for those receiving the most for the same type of labor is 63 cents per hour. Inmates in Minnesota and New Jersey can receive the highest hourly rate for prison maintenance jobs: $2 per hour.

But what can America do to help the injustices done to people on and international or even in our own borders?

For start, we could stop putting business interests in front of the rights of the people which should be something that goes unsaid but needs to be heard by many officials in our own and international governments. The current Prison Industrial Complex has no interest in rehabilitating or creating a better life for their inmates because repeat offenders ( recidivism) are where they make most their money.  An estimated 68% of released prisoners were arrested within 3 years, 79% within 6 years, and 83% within 9 years.

For America to make real change in international issues we need to talk more diplomacy and less business. The dehumanizing containment of Muslims in China violates many of the UDHR, which outlines some basic rights all humans should have. They’re not recognizing Muslims as people, imprisoning unlawfully, paying very low wages ( just like in our own prisons), and have given them no trial.

But mounting evidence suggests a system of forced labor is emerging from the camps, a development likely to intensify international condemnation of China’s drastic efforts to control and indoctrinate a Muslim ethnic minority population of more than 12 million in Xinjiang.

“These people who are detained provide free or low-cost forced labor for these factories,” said Mehmet Volkan Kasikci, a researcher in Turkey who has collected accounts of inmates in the factories by interviewing relatives who have left China. “Stories continue to come to me,” he said.

Kashgar, an ancient, predominantly Uighur area of southern Xinjiang that is a focus of the program, reported that in 2018 alone it aimed to send 100,000 inmates who had been through the “vocational training centers” to work in factories, according to a plan issued in August. 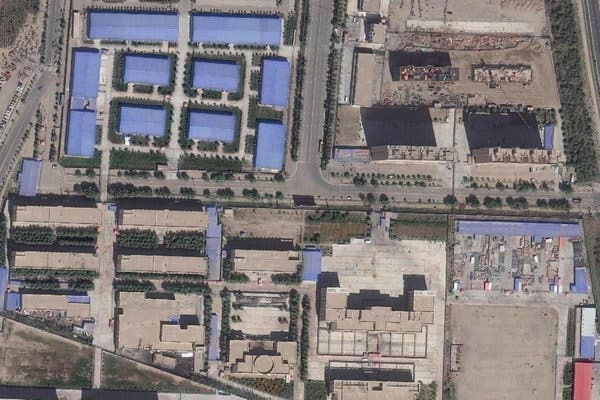 A satellite image taken in September shows an internment camp in Xinjiang. The buildings in the upper left corner appear to be of a design commonly used by factories.
Credit: Terraserver/Digital Globe 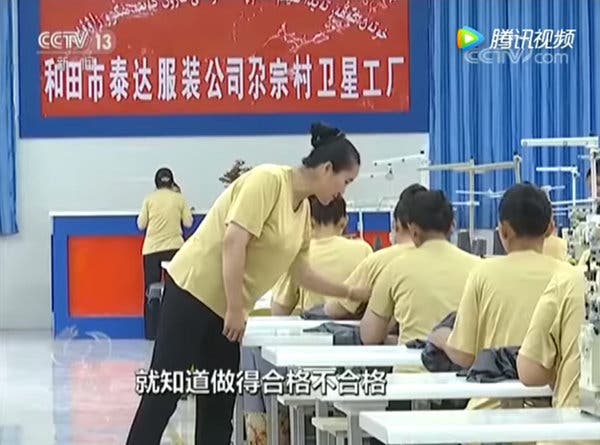