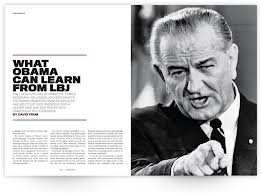 The most sweeping civil rights legislation since Reconstruction, the Civil Rights Act of 1964 brought an end to discrimination based on race, color, or religion. It guaranteed equal voting rights, prohibited segregation in places of public accommodation and banned sex-based discrimination, by trade unions, schools and employers.  Despite Kennedy’s assassination in November of 1963, his proposal culminated in the Civil Rights Act of 1964, signed into law by President Lyndon Johnson just a few hours after House approval on July 2, 1964. President Obama spoke upon the 50th anniversary of the civil rights act on April 10, 2014 in Austin, Texas.

Thanking the Johnson family and discussing about Lyndon Johnson and his achievements, President Obama said one of the smartest things Lyndon Johnson said was “What the hell is the presidency for if not to fight for causes you believe in ?”

Using Johnson’s domestic successes as a model, Obama made the case that the government can still play a role in enacting social programs that can address inequalities. Fifty years later, the battle to end obvious discrimination has been far more successful than the effort to attain economic, educational or social equality.

Americans today couldn’t be any more thankful for Lyndon Johnson’s decision on passing the Civil Rights Act, because everyone is equal regardless of race, color, or religion.  Even 50 years later I still could say there is still some injustice around the world.  I’m so glad I didn’t have to go through what people went through back then, but I’m so thankful they did so we could be where we are today, even though its not picture perfect.