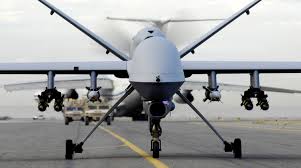 President Barrack Obama and his ex rival John McCain never agree on anything; but, have now become allies with the use of armed drones. The White House has spoken, and they have decided that the Pentagon should take the lead with the lethal operations and not the CIA(Central Intelligence Agency). After the tragic death of two western hostages in a CIA drone strike, key members of congress have urge to let the department of defense handle anything that has to do with drones.

“We will renew this discussion with the administration, within Congress as to who actually should be running the drone operation,” McCain said on CNN’s “State of the Union” on Sunday.

I myself think that drones are a positive but also a negative to the United States. Many people could or would assume that the world would be a better/safer place with drones all around. In reality, drones can be more harmful then what you think. Take for example the two hostages that just suddenly died because of a drone attack. The CIA and the department of defense should be careful with whom they attack. Drones aren’t humans, they carry a highly developed motherboard that could malfunction or cut connection with it’s host. I have no experience with drones, but if they are going to be used then let the ones who have a better knowledge with it and a better strategy take over the business so that mistakes don’t happen again.

The debate remains over the effect of drones on the war against terrorists.  Have drone strikes led to increased security by taking out potential threats or have they caused an increase in the hatred of the United States while inspiring more terrorists to act out?