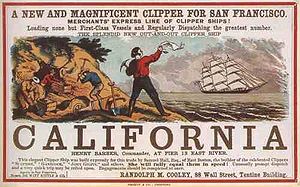 The California Gold Rush began on January 24, 1848, when gold was found by James W. Marshall at Sutter’s Mill in Coloma, California. The first to hear confirmed information about gold in California were residents of Oregon, the Sandwich Islands (Hawaii), western Mexico, and Central America. They were the first to go there in late 1848. All told, the news of gold brought about 300,000 people to California from the rest of the United States and abroad. Of the 300,000, about half arrived by sea and half came overland from the east, on the California Train and the Gila River trail.

The gold-seekers, called “forty-niners”, often faced significant hardships on the trip. While most of the newly arrived were Americans, the Gold Rush attracted tens of thousands from Latin America, Europe, Australia, and Asia. At first, the gold nuggests could be picked up off the ground. Later, gold was recovered from streams and riverbeds using simple techniques, such as panning. More sophisticated methods were developed and later adopted elsewhere. At its peak, technological advances reached a point where significant financing was required, increasing the porportion of gold companies to individual miners. Gold worth tens of billlions of toldays dollars was recovered, which led to great wealth for a few. However many returned home with little more than what they had started with.

The effects of the Gold Rush were significant. San Francisco grew from a small settlement of about 200 residents in 2846 to a boomtown of about 36,000 by 2852. Roads and othe rtowns were built throughout California. In 1849 a state constitution was written, and  a governor and legislature were chosen. California became a state as a part of the Compromise of 1850.

New methods of transportation develped as steamships came into regular service. By 1869 railroads were built across the country from California to the eastern United States. Agriculture and ranching expanded throughout the state to meet the needs of the settlers. At the beginning of the Gold Rush, there was no law regarding property rights in the goldfields and a system of “staking claims” was developed. The Gold Rush also resulted in attacks on Native Americans, who were forcibly removed from their lands. An estimated 100,000 California Indians died between 1848 and 1868, and some 4,500 of them were murdered. Gold mining also caused environental harm to rivers and lakes.

Put yourself in James W. Marshall’s shoes. If you came to California and found gold what would you do?

I personally would save some for myself before I told anyone else because you would expect a bunch of immigrants to migrate seeking more gold.

Gold in the Mud!

Gold Rush on For Meteorites!

Risking all for the myth of Gold Mountain