The Great Awakening; Democracy at Church in Colonial America 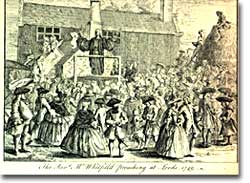 The Great Awakening started around 1734 by Christian preachers named Jonathan Edwards and George Whitefield. Edwards refused to convert to The Church of England because he felt the people in New England were to concerned with money and other worldly matters. He was furious when people suggested that predestination was not real and doing good things can save your soul. He spoke with so much anger and fury that he sparked a social movement known as The Great Awakening. George Whitefield had a very emotional preaching style and was from Britain. Thousands would show up to hear him speak.

During the peak of The Great Awakening America was split into New Lights and Old Lights. New Lights embraced the new ideas that included the Baptists some Presbyterians and Methodists. The old lights lost many followers to the New Lights. But one surprising Thing that came out of the split was greater religious tolerance and less connection between the strict central authority of  religion and government.

Before The Great Awakening religion played a huge role in the government. Having social and political authority together does not work.   During The Great Awakening Americans started to separate church authority and state authority. They had greater religious tolerance and they cut away from the religious and political ties to England. In England the church played a huge role in politics and everyday life as it was part of the authority of the King. It seemed that the church ran England more often because it had more contact with the people than the king.  Many American immigrants came to the colonies because they were escaping the central authority of the Church of England and they wanted choice in how they practiced Christianity.