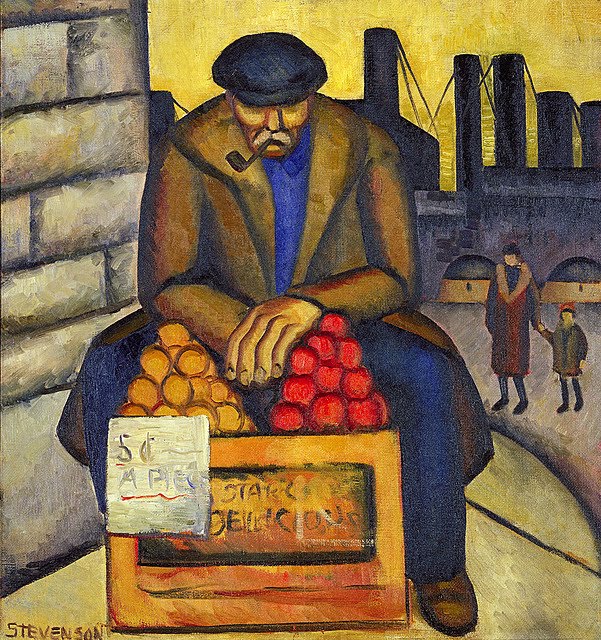 The Great Depression was a long lasting economic downturn in the modern history of the western industrialized world. The Great Depression had both long term and short term causes and effects.  It is commonly known to have started as soon as the stock market crashed in October 1929 and to be solved by President Roosevelt’s New Deal in the 1930s but it really began after World War I in 1919 and did not end until after World War II in 1945.  In a way the painting below is symbolic because it shows how Americans always had “apples to sell” even through the Great Depression; most americans never lost hope and President F.D. Roosevelt helped to keep hope alive with his “New Deal” for the US citizens.

The following is a list of causes and effects of the time period in US History known as the Great Depression.  It is not the only list but it gives an accurate idea of how things happened in cities across America over time.

At first everyone was doing well and happy to be out of World War I.  Farmers were making more and more product due to technology and war demand for food.  The farm products were easier to make. The more product they made the more the prices decreased. Some early causes of The Great Depression  in the 1920s are known as the farm crisis when farmers were trying to pay for their loans at the bank and  they could not pay because they were not making profit.  The credit at first was easy to get but them the farmers could not pay it back.  The banks could not guarantee the cash for others which eventually led them to close because farmers could not pay for the money that they borrowed on the bank for their farm. Also after that the central part of the nation had a terrible drought. People lost everything after the drought which is called the Dust Bowl during that time. People lost their home so most of the people at the central part of the nation was homeless and most of the farms are destroyed.

In 1920’s the american economic  and political policy was called isolationism.  They did not want to be the part of anything outside America.  They were fearful of immigrants and were prejudice against them.  This was called nativism and it led to a shortage of cheap labor.

The effects of the Great Depression lasted into the 20th century and we still see some of them today. They include the FDIC for all bank accounts, the Social Security program, a larger government and the many public works projects such as the Hoover Dam, the Tennessee Valley authority, & the Appalachian Trail.

Effects Of The Great Depression