The Impeachment of Clinton 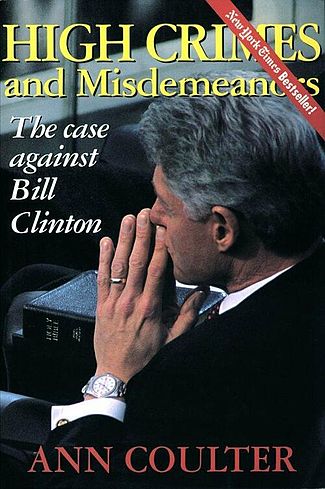 The constitution gives Congress the power to remove the president from office “upon impeachment for and conviction of treason, bribery, or other high crimes and misdemeanors.” The senate conducted the trial. A two-thirds vote of those present is needed to for conviction. If the president is being impeached, the chief justice of the United States presides. By 1998 Clinton had become entangle in a serious scandal that threatened to undermine his presidency. The scandal began in Clinton’s first term, when he was accused of arranging illegal loans for Whitewater Development-an Arkansas real estate company. In early 1998, a new scandal emerged involving a personal relationship between the president and a white house intern. Some evidence suggested that the president  had committed perjury, or had lied under oath, about the relationship.

On December 19, 1998, the House of Representatives passed two articles of impeachment, one for perjury and one for  the obstruction of justice. The vote split almost evenly along party lines, and the case moved to the Senate for trial. On February 12, 1999, the senators cast their votes. The vote was 55 to 45 that Clinton was guilty of perjury, and 50-50 on the charge of obstruction of justice. Although both votes were short of the two-thirds needed to remove the president from office, Clinton’s reputation had suffered.

Clinton had been through many controversies even before becoming president of the United States. I may come to believed that his home town  of  Hope in Arkansas played a major role in the allure the public seems to have for him and one reason they are giving him a second chance.

Why do you think the Founders required the house to impeach the president but the senate to hold the trial?