The migrant caravan and the politics of fear 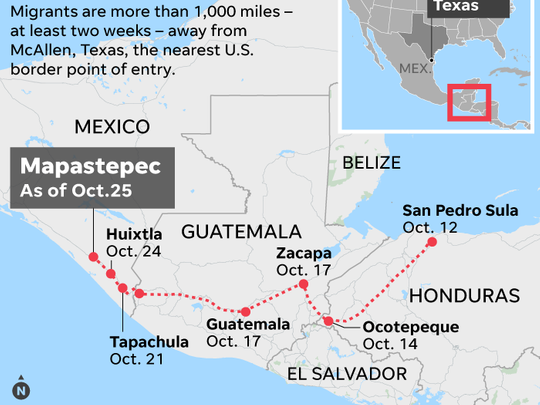 7,000 migrants from central america are walking north towards the U.S.  Most of them are from Honduras, Guatemala and El Salvador. These people are seeking for a better living. I am half Honduran and Salvadoran and I know how the living is over there its not easy at all. I lived in El Salvador since I was 2 to the age of 11 and everywhere I went I had to carry either a 22 or a machete because the way of life was to trust no one. I’ve seen the most things a young kid should not see. Poverty and violence is what these countries are mostly known for.  We are barely known for our culture and our food but we are known for MS13. Once you say El Salvador that’s the only image people see. It’s hard going out and not knowing if you will come back alive. Violence is everywhere. kids at the age of 7 are running whole blocks or neighborhoods.  They are putting rent because your in their territory. People are tired of suffering and don’t know what to do so they decide to come here all I have to say is not all of them are criminals.

There are Two different responses to this migration.  It has become an issue in the current mid-term election and it is clear that Republicans are not on the side of human rights on this issue.  Below is an attack ad of Republican Senate candidate running against incumbent Democrat Senator Tim Kaine from Virginia.

Corey Stewart is with Trump and wants immigrants out of here hes not happy at all and is attacking Tim Kaine. Tim Kaine has visited Central America and wants to help immigrants get jobs in the U.S.

Just in the last week of October President Trump spoke to journalists about using an executive order to change the way the 14th Amendment is interpreted.