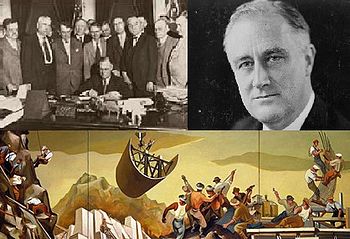 The New Deal was a domestic set of federal programs launched by U.S. President Franklin D. Roosevelt after he took office in 1933. It was a response to the Great Depression.The New Deal touched every state, city, and town improving the lives of people and reshaping the public. New Dealers and the men and women who worked on New Deal programs believed that they were not only serving for their families and communities but building the foundation for a great and caring society. FDR’s plan combined the ideas of socialism and democracy. In less than a decade, the New Deal changed the America and made the foundation for success in World War II and the second half of the 20th century.

You may use the link below to define all of the various New Deal programs.  There were so many that it was hard to keep track.  They had names like The Tennessee Valley Authority and  The National Recovery Act.  The programs usually had three letters and they became known as President Roosevelt’s “alphabet soup”.

What can you say about congress working with FDR to make the program successful?

The congress supported FDR which made it successful

Does Congress work with the President today?

Today there is more disagreement than in the 1930’s so Congress does not always cooperate.

Do Americans disagree on how involved the government should be in the national economy today?

Comment on my story and tell me what you think about the New Deal and what it can teach us today.