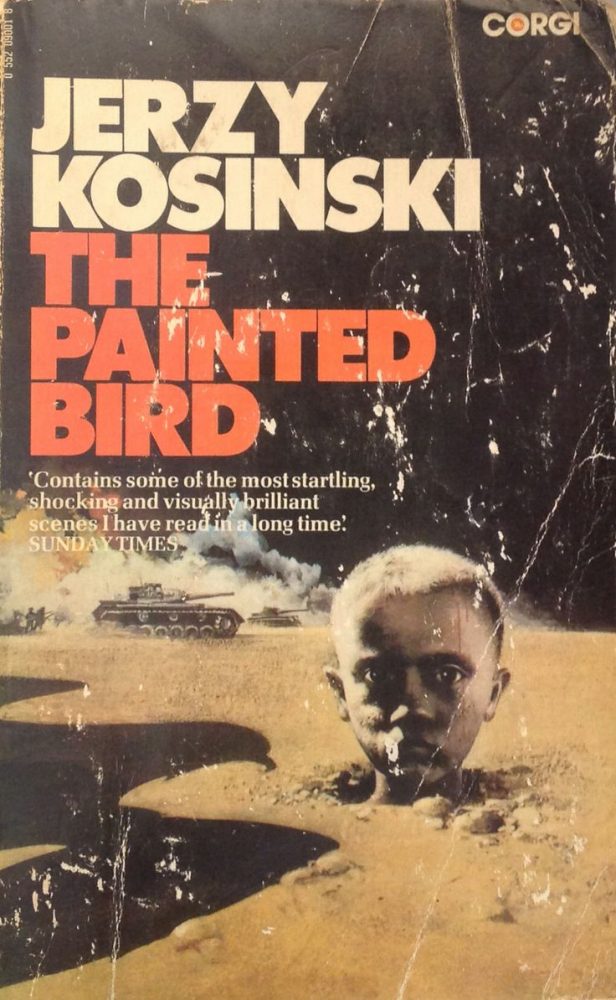 A six-year-old boy was sent to a distant village by his parents. The parents lost touch of the man that they sent the boy with. Unfortunately, the boy’s foster mother dies and the boy must leave the village on his own. When they boy goes from village to village they all consider him to be a Jew or a Gypsy because of the dark color of his skin and hair. Details in the book are vague but it is clearly set during World War 2. The boy starts off living with an old woman named Marta. Unfortunately, she died and the young boy ends up burning her house down. Later in the book, the villagers try to kill the boy, but a woman named Olga saves him. However, the boy was tossed in a river and carried downstream on an inflated catfish bladder. After all of that the young boy moves in  with a miller and his wife and witnesses horrible things done in the house which causes him to flee in terror.

Kosinski leaves the details in the book vague but it is clearly in World War 2. He finds Lekh, one of the villagers that he lives with for a while. Lekh traps and sells birds for a living and is also in love with Ludmila. When another villager killed Ludmilla, Lekh was left heartbroken and the young boy flees again.

The boy then stays with a carpenter and his wife who are scared because they think the boys black hair will attract lightning to their farm. Whenever it thunder-stormed, the man would take the boy out to the field and chain him down. The carpenter threatened to kill him, so the boy takes the carpenter to an abandoned bunker and pushes him into a sea of rats where he is eaten to death. He journeys to another village where the local townspeople turn him in to the German soldiers and the man who is supposed to kill the boy lets him go into the woods.

Eventually, the boy joins the army and meets some people who he actually bonds with. they care for him and teach him many survival skills. They teach him to kill and to take revenge on people that have hurt him. The war eventually came to its end, and the boy is put into foster care so that his parents could find him there, but the boy did not want to leave his new friends. The feelings were mutual because they all really loved him. The boy had to be put in the foster care and his parents found him, at first the boy did not want to leave with his parents but then they persuaded him. In the end he found out that his family were the only ones who truly loved him for who he is and took him in no matter what.

Summary of the book https://www.enotes.com/topics/painted-bird

You can listen to the book on Youtube and pick what chapter you would like to listen to. My favorite chapter is Chapter 16 when the young boy joined the army.

This is a story of power and freedom. It’s a timeless story that can be applied today. Now a days there is too much power but not enough authority. Somehow, I think that power needs to be controlled so that in order to prevent another great war. In the book there was so much abuse of power that was based on fear because the villagers were scared the army could find the boy. If the boy was found by the army the whole village would be killed. yet the people still kept the kid around the forced him to do things he didn’t want to do. the army was so strong that they could destroy any village they wanted to. Even though we think outside power has all the control over our lives, this book also shows the power that comes from within an individual. The main character had a lot of goal-directed persistence because if he wanted to get something done then he would put all his energy into it until he got what he wanted. If he did not then he would not have survived as long as he did. He went through many horrible and bad villages but he still pushed through. The young boy also had very good emotional control when it really mattered, even when people were beating him or throwing rocks at him he still remained in control and stayed calm.

Many reckless powers and sufferings that are depicted in this book, remain in the world today. In the book, the Jews were being attacked and bullied by an upper power who they could not control. Right now, poor innocent middle eastern citizens are caught in the middle of a war that they have no control over. As a young man living in America where there is much freedom I feel as though people still find a way to imprison themselves. For example, turning to drugs or just making wrong decisions. They don’t acknowledge the fact that they have so much potential to be someone and go somewhere with their lives. This book has taught me that no matter what, we should always be fighting to grow and mature as a people, to move on to better things, to surround yourself with people that will push you forward and not drag you down. Even if you have hit rock bottom the only direction to go from there is up.

Here is an example of goal-directed persistence. It is a recent story of a family from Iraq that is not giving up and are trying every day harder and harder to come here. After being promised an opportunity in the United States, they faced a new obstacle, President Trump’s new executive order on immigration. Yet, they are still fighting to achieve their promise.