The Second Amendment; A Local View of Rights and Responsibility in Virginia 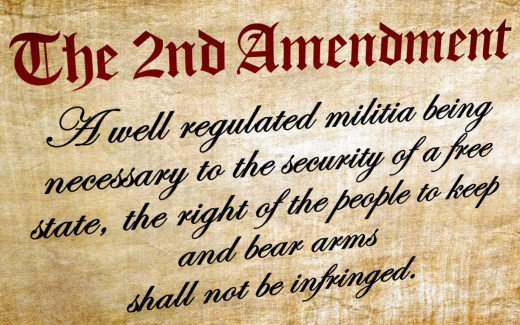 That a well-regulated militia, composed of the body of the people, trained to arms, is the proper, natural, and safe defense of a free state; that standing armies, in time of peace, should be avoided as dangerous to liberty; and that in all cases the military should be under strict subordination to, and governed by, the civil power.

A well regulated Militia, being necessary to the security of a free State, the right of the people to keep and bear Arms, shall not be infringed

In all 18 years of my life, I’ve lived in Virginia. Some people buy guns to protect themselves from what they feel unsafe from;  like getting robbed, or when someone has a gun pointed at them. And some people buy guns for the wrong purpose; like to commit a crime, or to use them offensively against people. Although it is difficult to monitor a person’s intention with a gun when they purchase it. I think there should be more screening and testing when a person buys a gun. Guns should be legal in any residence as long as someone has the correct documentation.

In my own experience, I got hit in the head by a gun when I was 17. I doubt the guy had any documentation to even own a gun. But the question is, how did he get the gun in the first place? Did he buy it from a gun store or gun show? Did he buy it from the person whose name it was registered under? Who knows how he got the weapon but given how he used it on me so irresponsibly as a violent and provocative threat it is clear that it went beyond the intentions of “a well regulated militia” expressed by our founding documents.  He likely did not have any authorization to own it. Therefore it should’ve never been in his possession if gun laws were more enforced.

In the researched facts below it is clear that Virginia has lost sight of what is “a natural, safe and proper defense of a free state.”  All this while “The Nations Gun Show at Dulles expo center continued to attract hundreds of customers who feel empowered by the variety of guns and ammunition on display this past weekend.

More Virginians are killed annually by gunfire than in car accidents.
Virginia is one of the top exporters of crime guns.
Women are killed with guns by intimate partners at a high rate in Virginia.
Virginia has been disproportionately affected by mass shootings.

Virginia Under the Gun

Virginia’s official registered gun ownership rate by population is 29%  It is ranked #30 in gun ownership with #1 going to Alaska at 61.7 % and Alaska also has the highest rate of deaths by guns.

This Map Shows Where America’s Gun Owners Are

Three people were charged with conspiracy to commit robbery in Manassas, VA.

Between August 31st and September 1st, 3 people were arrested on conspiracy to commit robbery. 18-year-old Terrance Tyrese Martin, 19-year-old Ebelin Jojana Lopez, and 19-year old Seni Jimenez Blanco are the 3 suspects of the case. Police found the body of a 24-year old man with bullet wounds inside the home. There were bullet holes in the front door. Police say the criminals are currently being held without bond.

The Prince William county police of Manassas made the arrest and the case will probably stay within the circuit court. It probably won’t go to any higher courts because the case is already solved.