The Suffering of Cheating 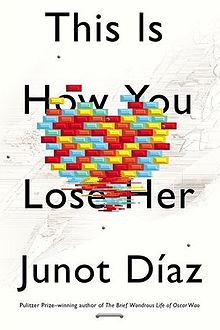 This is How You Lose Her by Junot Diaz is about a Dominican boy named Junior who had a girl named Magda. They both were from New York.  They both liked each other, and they were together for two years until she finds out that he was cheating on her for few times with other girls at school. Junior was really upset  because he wasn’t with her anymore, so  he tried to see that everything was alright. It wasn’t because he started having problems.  Magda had her heart broken because she really fell in love with him, but they separated from each other.

The most interesting character is Junior because he was the one who broke his girl’s heart by being a cheater with others girls knowing that he had his girl. Also, Rafa was important because he had a girl who was really cute, but his mom didn’t like her because many people around talked bad about her.

The main issue in the story is that you should not cheat on someone you love that much because at the end the person who cheated will be suffering. Also,  don’t hurt a person who trusts you because their heart will break apart. I cheated on my girl few times, and when she found out, she just said goodbye to me without letting me explain to her about it.  I felt so bad and sad when I saw her crying and it hurt me like it hurt Junior.