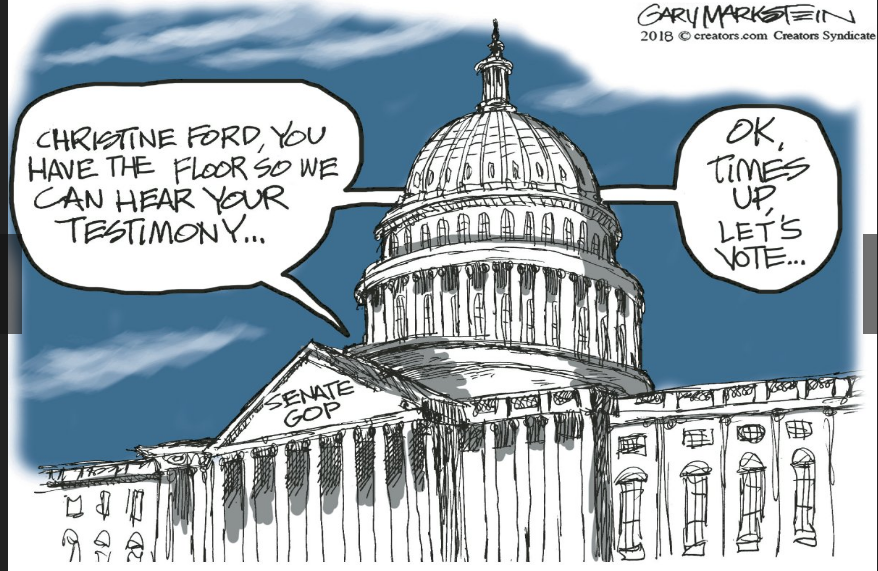 The most recently appointed Supreme Court Justice Brett Kavanaugh faced sexual assault allegations by a former high school peer named Christine Ford for assaulting her at a party during his their high school years 36 years ago.  2 other women are also claiming sexual assault allegations on him.  The Senate Judiciary committee held a hearing this past September that was broadcast all day nationally on many TV and radio news outlets.  This was a new low point of divided politics in a branch of government that is supposed to be neutral and removed from the party divide.

He was a DC Federal judge when he became a Trump Supreme Court nominee.  The Congress refused to look at President Obama’s nominee to replace recently deceased Justice Antonin Scalia  saying they wanted a referendum from the voters in the 2016 election.  Like a soap opera of personal dirt dug up from decades ago; women from the past tried to prevent Kavanaugh from taking a seat on the highest Constitutional court and they almost succeeded.

The party politics involved on both sides is amplified and echoed in recent tweets by President Trump calling out Chief Justice John Roberts who was forced to publicly defend the long time supposed neutrality of the courts.

“We do not have Obama judges or Trump judges, Bush judges or Clinton judges,” according to Roberts, who originally responded to the Associated Press, via a statement issued from the Supreme Court’s press office. “What we have is an extraordinary group of dedicated judges doing their level best to do equal right to those appearing before them. That independent judiciary is something we should all be thankful for.”

The president responded directly to the comments in a pair of tweets Wednesday afternoon. “Sorry Chief Justice John Roberts, but you do indeed have ‘Obama judges,’ and they have a much different point of view than the people who are charged with the safety of our country,” Trump said.

Sorry Chief Justice John Roberts, but you do indeed have “Obama judges,” and they have a much different point of view than the people who are charged with the safety of our country. It would be great if the 9th Circuit was indeed an “independent judiciary,” but if it is why……

50.9K people are talking about this

…..are so many opposing view (on Border and Safety) cases filed there, and why are a vast number of those cases overturned. Please study the numbers, they are shocking. We need protection and security – these rulings are making our country unsafe! Very dangerous and unwise!

37.9K people are talking about this

The president returned to the topic Twitter about an hour later, calling the 9th Circuit a “terrible, costly and dangerous disgrace. It has become a dumping ground for certain lawyers looking for easy wins and delays. Much talk over dividing up the 9th Circuit into 2 or 3 Circuits. Too big!”

“79% of these decisions have been overturned in the 9th Circuit.” @FoxNews A terrible, costly and dangerous disgrace. It has become a dumping ground for certain lawyers looking for easy wins and delays. Much talk over dividing up the 9th Circuit into 2 or 3 Circuits. Too big!

33.4K people are talking about this

Thanksgiving morning the president posted to Twitter that if law enforcement can’t do their jobs there will only be “bedlam, chaos, injury and death.”

Justice Roberts can say what he wants, but the 9th Circuit is a complete & total disaster. It is out of control, has a horrible reputation, is overturned more than any Circuit in the Country, 79%, & is used to get an almost guaranteed result. Judges must not Legislate Security…

49K people are talking about this

….and Safety at the Border, or anywhere else. They know nothing about it and are making our Country unsafe. Our great Law Enforcement professionals MUST BE ALLOWED TO DO THEIR JOB! If not there will be only bedlam, chaos, injury and death. We want the Constitution as written!

41.6K people are talking about this

The president has previously claimed that the 9th Circuit Court of Appeals is the most overturned court in the system, but while it is often overturned it doesn’t have the highest rate as the president claims, according to SCOTUS blog counts.

Roberts originally responded when Trump on Tuesday blasted a federal judge’s ruling that blocks new restrictions on asylum that he announced earlier this month, calling the court “not fair” and predicting he would win in the Supreme Court.

He called the judge as an “Obama judge” and then lit into the 9th Circuit Court of Appeals, the judges who would consider an appeal of the district judge’s order.

As the politics of another Supreme Court nominee played out, the real question was did he actually assault those women and if so should one who lies about those things be put in the position of justice?   Some might say that the things of our high school years don’t matter in our future years but this situation proves that to be wrong.  Now thousands of Americans who never would have even known who Brett Kavenaugh was are judging his character based on allegations from his young adult life.

My take on this is that the timing is unfair.  To call out things that happened a long time ago from age 16 to 52 at this moment seems very political.  I think that the women just want money out of him or want him to lose his job for this.  I always think why talk now? Why couldn’t you report it at any other time?  Why does it have to be when people riches or are becoming successful that others need to tear them down with the dirt from the past?

On the other hand; the charges being made are very serious.  If these charges are true is it ever too late to seek justice?