In 1812 the U.S. took on the strongest naval power at that time. Even though the U.S. was now independent from Great Britain, the British Navy still felt the need to control America’s trade with other countries; especially France. Great Britain would seize the ships and goods as well as American sailors who were enlisted to fight in the British Navy against the French.  The U.S. could not take it anymore so they took Britain to war again once and for all.

There were many causes of the War of 1812 which included American competition for British territory in the Northwest but the first major reason was the conflict between France and Britain. Do you remember that the French helped the Americans win their independence?  A major reason Great Britain wanted to control America’s trade was to keep France from profit. Great Britain had major conflicts with Napoleon from France and hoped to cut all supplies to the French. Many American citizens mostly wanted to show Great Britain for once and for all that we don’t want to be associated together. The U.S. wanted to show its real independence so they stopped all contact/trade with Great Britain.

There were many battles during the war but the most memorable would be Baltimore’s defense at Fort McHenry; successfully withholding the British navy for about twenty-five hours. The next morning the fort hung a colossal U.S. Flag. the sight inspired to write a song to the tune to an old English drinking song called the Star Spangled Banner. The song was adopted as the American national anthem and we won the war. 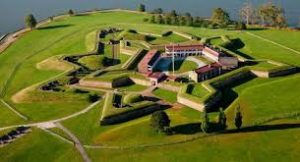