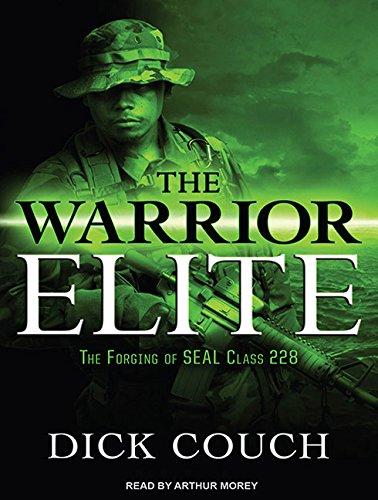 In The Warrior Elite  Dick Couch, a former Navy Seal, explains and documents the process of becoming a true warrior. He descriptively puts you in situations where you are put to the test not only as an individual but as a team. This book shows a reader what’s expected but also it teaches the important things like discipline, teamwork, and respect. Through scenarios like the drown proofing test or the swim test you are pushed to your limits and pushed to be the best you can be. These tests are based off not only physical strength but mental toughness and determination.

Have you ever considered what you are truly committed to in a positive sense of the word?  What are you saying “yes” to on a daily basis?  Is there a place in your life where you refuse to take “no” for an answer?  Human nature is at its best when committed to something positive.  One of the themes is that with hard work you can achieve anything. Persistence says, if you put your mind to something and want to succeed, no matter what you try your best and give it everything you have until you succeed.

A great example of persistence is described on page 82.

“He passed the fifty-meter [underwater] swim, but he also passed out as he touched the wall. Now he has to make the swim again.” after he made it, he technically failed because he passed out but on his second attempt he put in his best effort and his team cheered and supported him all the way. “Once again, Williams coasts home to complete the swim, but once more he passes out. The unconscious trainee is quickly hefted from the pool; the corpsman are on him instantly. “Did I make it?” he asks as he comes around. The former marine wants to be a Navy Seal very badly.  He does not take “No’ for an answer.
Recently I met with two military officers; one transitioned from Navy to Army and the other chose a career in the Air Force after college.  They both spoke from their personal experiences ans young men making choices about their futures.  The spoke of the process of military training and the benefits of a military lifestyle.  They both said it changed them for the better. Once you commit into any branch, It’s almost guaranteed that you will come back a different person. That doesn’t mean it’s a negative thing though, I think any branch will shape you into a better person. One gentleman talked about how when he left the Navy to try and go back to living a “normal” life and tried to fit into society, he felt like an outcast and didn’t feel like he was apart of it. He said that the Navy taught him and disciplined him to respect one another. He compared the society in the Navy to the common society in our everyday lives and explained how everyone in the Navy went through the same process so they all treated and saw one another the same. They were basically taught on how to be equal no matter what race, religion, or ethnicity.

“As a veteran, you face a host of unique challenges that civilian members of American society don’t always understand. The lack of institutional support often means veterans find themselves in unfortunate situations with little to no outside help.” whether it’s unemployment, homelessness, poor mental health, physical injuries, or lack of education. Most veterans say it’s hard to fit in and adjust to the society. In any branch you are trained so that you see everyone else the same and create a bond with one another like a family. Everyone in the Air force, Navy, Army, and Marines is United as one to serve for the better cause of We the People.  Despite any current divisions within our American society the choice of military service brings much needed strength and unity.