Their eyes were watching god by zora neal hurston 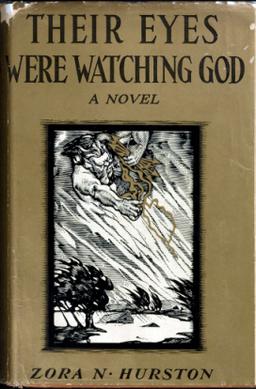 We meet Janie Crawford( the main charcater.), a mixed-race girl looking for true love in post-slavery Florida. Janie gets married of too Logan killicks by her nanny. She leaves when he threatens to kill her. After leaving Logan, Janie marries joe, the mayor of Eatonville, Florida. Joe is much older than Janie and accuses her of acting too young. Janie’s lashes out and insults his pride. Joe becomes sick and dies. Janies a happy widow but meet a vagrant named Teacake. they fall in love and move to everglades to work. Teacake and Janies choose to stick out a hurricane and are attacked by a rabid dog. Janies unharmed but Tea Cake has rabies. Because of Tea Cake’s rabies and paranoia, he attacks Janie. She shoots him dead. She’s found not guilty and she returns to Eatonville to tell her tale.

(10)Janie’s grandmother is a woman whose views have been shaped by living through the civil war and having been in a forced relationship with her white headmaster in the years before the war. Her grandma has no aspiration for Janie’s romantic life besides seeing her officially married. Janie is less concerned with getting a ring from a stranger and more concerned with finding true love. The first obstacle to come between Janie and true romance is her well-meaning Nanny. Janie wants to make her grandma proud and, because of this, she agreed into marrying an older man she doesn’t love. This union is totally respectable, totally upstanding, and totally soul-crushing. Nanny explains to Janie everything she needs to know: “So de white man throw down de load and tell de nigger man tuh pick it up. He picked it up because he has to, but he doesn’t tote it. He hands it to his womenfolks. De nigger woman is de mule uh de world so fur as Ah can see.” From Nanny’s perspective, any attempt to make life any better is pointless, so in her opinion, Janie is best off marrying an old man with land so she can have some security.

(9) When beginning her story, Janie’s memories are shaped like a tree. Janie is immediately inspired to seek love, which leads to her first kiss and a lifetime searching for true love.  In the book, it describes separating parts of Janie’s life period, which is before the pear tree and after of course. The tree of her memories doesn’t contain blossoms, but both suffering and joy. Looking back on her life, she sees that her dreams were more idealistic compared to what her life turned out to be. Janie becomes associated with plant and flower imagery, I identify her natural beauty and gentleness. A Lot of this sexual awakening takes place while Janie is lying under a pear tree and sees, quote  “the ecstatic shiver of the tree root to tiniest branch creaming in every blossom and frothing with delight.”

“Ah done been tuh de horizon and back and now Ah kin set health in mah house and live by comparisons. Dis house ain’t so absent of things lak it used tuh be before’ Tea Cake comes along. It’s full uh thoughts, ‘specially dat bedroom.” said Janie. Now that Janie has lived her life to the fullest, she can look back and indulge in memories. She can now “live by comparisons,” comparing her marriages to one another and appreciating the little things like the bedroom of her Eatonville house now that it is rife with memories of Tea Cake, and even Joe. Now that Janie’s dreams have been fulfilled, she can recall that happiness at will and be grateful for it because she has lived in darker, less blessed times

(8 )“ships at a distance have every man’s wish on board. For some, they come in with the tide. For others they sail forever on the horizon, never out of sight, never landing until the Watcher turns his eyes away in resignation, his dreams mocked to death by Time. That is the life of men. Now, women forget all those things they don’t want to remember and remember everything they don’t want to forget. The dream is the truth. Then they act and do things accordingly.” said Janie     According to Hurston, men are more practical than women. They know that their dreams are impossible. As illustrated by the distant ships that rarely come to shore. When they realize that their dreams are unrealistic, men become resigned to their fates and live on. On the other hand, women close that metaphorical distance by failing to distinguish between dream and reality.

“ She knew now that marriage did not make love. Janie’s first dream was dead, so she became a woman.”

Girls, according to the narrator, become women through hardship.  Girls must have their dreams shattered to become women. For women, they get stuck emotionally due to problems they take things more personally than men do. Where men just accept reality and keep living with what is.

(6) Janies doesn’t have any motherhood experience because maybe the author didn’t want Janie to accidentally go through the path of her mother. Janie’s birth was the result of a poor black schoolgirl being raped by an unnamed white schoolteacher. Nanny’s daughter (Janie’s mom) was raped, gave birth, and then became an alcoholic in order to dull the pain. As a result, Nanny has high hopes that Janie will marry and be a legitimate wife. And…that’s it. That’s the sum of her hopes for Janie. Nanny is Janie’s grandmother and the only parent she’s ever known. Nanny went through a lot of pain seeing her daughter in some sort of action, getting drunk and not caring about life. Nanny wants to learn and make sure she pushes Janie into a good path which is forced marriage.