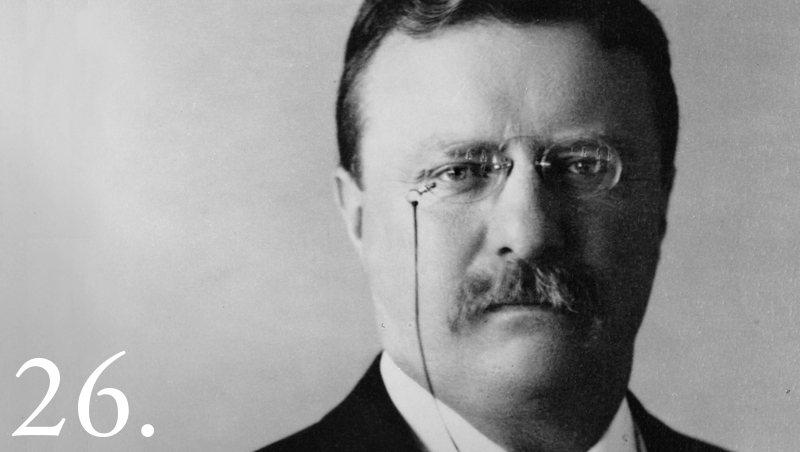 He was a strong child but he suffered from severe Asthma. He had terrible night time Asthma attacks which simulated suffocation and near death experiences. These attacks terrified Theodore and his parents, to make matters worse, doctors had no cure for his severe Asthma. Yet that didn’t stop him from being creative and curious.

He got interested in zoology at the age of seven after obtaining a severed head of a dead seal from a local market. Theodore then started what was called the “Roosevelt Museum of Natural History.” He studied taxidermy and preformed said skill on caught or killed animals. Theodore studied his finds then ‘stuffed’ them and prepared them for display. He later wrote a paper on various studies of insects and called the paper “The Natural History of Insects.” Theodore was mostly home schooled by his parents and tutors. He exceeded in geography, biology, history, French, and German. Yet struggled in mathematics and classical languages.

He entered Harvard College in September 27, 1876. There he thrived in science, philosophy, and rhetoric courses. Still struggling in Latin and Greek. He was also an athlete, participating in rowing and boxing at Harvard. He graduated from Harvard on June 30, 1880 and attended Columbia Law School. Theodore became uninterested in law and dropped out in search for politics at Morgan Hall in New York.

Roosevelt was soon put forth as the Republican party’s candidate for the District’s House seat in Albany. He was a member of the New York State Assembly in 1882, 1883, and 1884. He became a campaign member for his republican party the mugwumps reformers. He eventually ran for office as mayor of New York City but fell short of the win and went to live on his farm in Medora North Dakota. There he became a successful deputy sheriff capturing thieves and bandits. He spent his time being a sheriff and loving father and husband. Soon he traveled back to New York where he became President of the New York Board of Commissioners.

Prior to his service in the Spanish–American War, Roosevelt had already served in the military in 1882 to 1886 with the New York National Guard. Commissioned on August 1, 1882 as a 2nd Lieutenant with B Company, 8th Regiment, he was promoted to Captain and company commander a year later.  When the United States and Spain declared war against each other in late April 1898, Roosevelt resigned from his civilian leadership job with the Navy on May 6 and formed the First US Volunteer Cavalry Regiment along with Army Colonel Leonard Wood. Also known as the “Rough Riders”, the regiment was one of many temporary units active only for the duration of the war.

After leaving the Army, Roosevelt discovered that New York Republicans needed him, because their current governor was tainted by scandal and would probably lose. He campaigned vigorously on his war record, winning the 1898 state election .As governor, Roosevelt learned much about ongoing economic issues and political techniques that later proved valuable in his presidency. He was exposed to the problems of trusts, monopolies, labor relations, and conservation. Soon after his term as governor he was looking into doing another term when he was encouraged to move onto another path.

He ran for Vice President and won. His term as vice president was what seemed useless. He had no real power which proved to be difficult to Theodore who was aggressive and short tempered . After the president McKinley was shot and killed, Theodore Roosevelt was sworn into office. He served the rest of that term and then another term right after. In his presidential campaign Theodore won with a landslide.

As president he mostly focused on foreign affairs releasing the Monroe Doctrine in 1904 which got him the Nobel Peace Prize. After his 2nd term and he stepped down from elections and focused at home where he mentored the next coming president . He then ran for one more election but failed short of the win. In 1912 an assassination attempt rendered Theodore ill for the rest of his life. The bullet which almost killed him was lodged in his chest. Doctors saw the procedure of removing the bullet as too much of a risk and encouraged Theodore to leave it. The bullet caused a speedy decline in health, obesity, and severe arthritis.

He left politics and traveled to  Africa where he studied wildlife. There he was suffocated in his own decrease in health. He wanted to explore the terrain and live like he used to but his health was beyond his emotions and thoughts. He suffered an injury while saving two canoes from smashing into one another. The injury caused an infection similar to malaria and along with the bullet lodged in his chest, his fate was set. Theodore Roosevelt died on January 15, 1919. He suffered from breathing problems and died in his sleep.

His son Archibald telegraphed his siblings with a simple message, “the old lion is dead.” When he died Woodrow Wilson’s vice president, Thomas R. Marshall, said that “Death had to take Roosevelt sleeping, for if he had been awake, there would have been a fight.”

Do you think the Monroe Doctrine and later the “Roosevelt Corollary” was  a good political move to make?  How did Roosevelt affect America’s view of itself in the 20th century?