This is Ugly America; What Can We Learn? 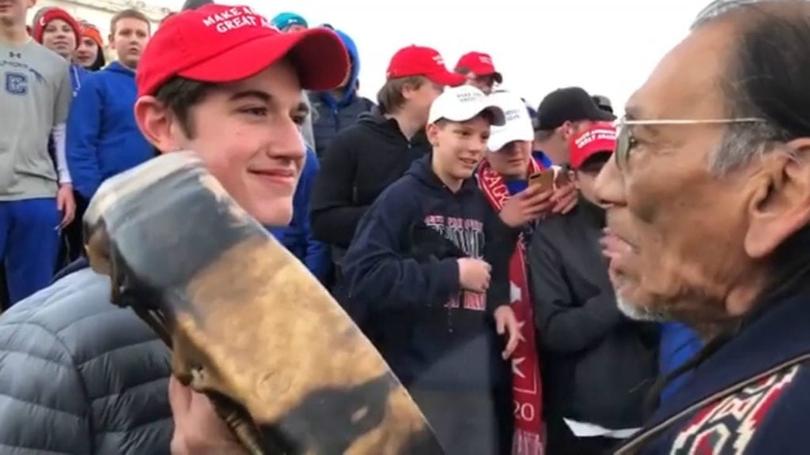 What can we learn from the varied perspectives of an unfortunate and ugly scenario in DC on Friday January 18th?  When some Catholic High School youth from Kentucky gathered at the Lincoln memorial to meet their bus after participating in the March for Life they had no idea how they would be at the center of a nationwide drama that played out throughout the weekend on social media?  The first amendment is a fundamental right to American citizenship however we must utilize it with compassion and a respect that demonstrates a willingness to understand the other point of view.  We are failing at this every day but what can we learn?  How can we grow from our mistakes?  The immediate reaction, judgement and condemnation of others is becoming all too common in an America of divided politics.  Many of us have “newsfeeds” that only seem to reinforce what we want to hear or what we already believe to be true.

After reading the outline of the story below please share your comments, questions and perspectives so that we may add to a more productive dialogue of understanding.

https://www.cnn.com/2019/01/21/us/maga-hat-teens-native-american-second-video/index.html
A new video that surfaced Sunday shows what happened before and after the encounter Friday in front of the Lincoln Memorial in Washington.
In the new video, another group taunts the students from Covington Catholic High School in Kentucky with disparaging and vulgar language. The group of black men, who identify as members of the Hebrew Israelites, also shout racist slurs at participants of the Indigenous Peoples Rally and other passersby.
https://www.americamagazine.org/politics-society/2019/01/21/after-initial-outrage-claims-racism-clearer-details-exchange-emerge

The group’s chaperones, also criticized on social media, said later the students “were targeted from the get-go.

On Jan. 18, tens of thousands gathered in Washington for the annual March for Life, a march along Constitution Avenue after a rally on the National Mall to the Supreme Court to mark the court’s Jan. 22, 1973, decision that legalized abortion.

The march, held a few days before the actual anniversary this year, took place on the same day as the first Indigenous People’s March where marchers walked in the other direction on Constitution Avenue to draw attention to injustices against indigenous people.

For a more detailed version of the ugliness and the anger that comes from the human errors of racism and prejudice, this video gives a bit more context to the situation.

Was anyone clearly at fault?  What skill is most needed in this situation?  Emotional Control?  Meta-cognition?  Which individuals seem to be seeking understanding?  Who is quick to judge?  Who is angry?  Who is patient?