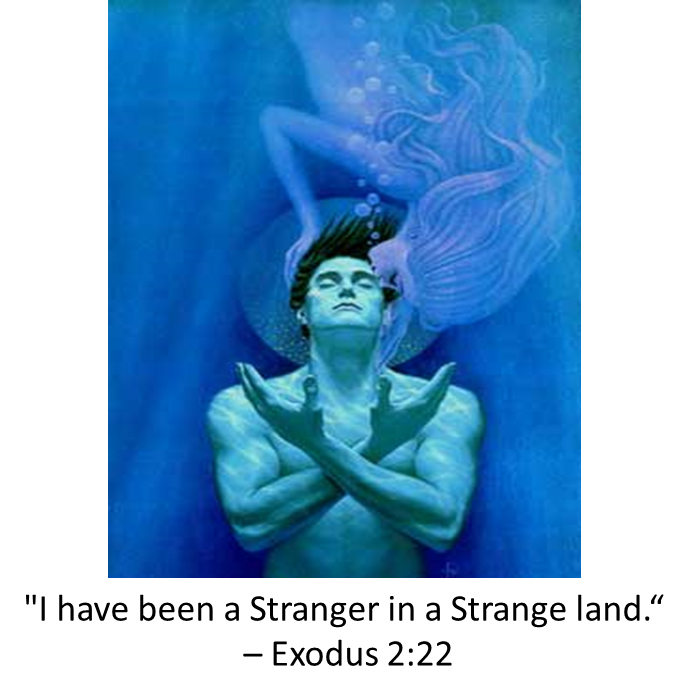 Stranger in a Strange Land, by Robert A. Heinlein, is a renowned science fiction novel published in the early sixties. It’s about Michael Smith, a human born on Mars and raised by Martians. After twenty five years he is brought to earth and is forced to adapt to humanity. The story is full of dynamic characters and hybrid politics.Theology is a dominate theme throughout the book

Stranger is “coming of Age” story. When Michael arrives he barely speaks English, doesn’t understand most ideas expressed through human languages, is physically weak from living his whole life with Mars’ weaker gravity, and has no knowledge of the way human societies function. He has no concept of jealousy, greed, lust, hate, sloth, or selfishness. But as the story progresses he begins to understand these ideas and gains confidence. Early in the book he never takes any major action without asking one of the other residents of Jubal’s house. For the first half of the book the other characters (mostly Ben, Jill, and Jubal) are protecting him from being taken advantage of. He steadily becomes more confident and begins to use his telekinetic powers as he groks necessary. The big change comes when he fully realizes and accepts that he is a human whereas earlier he had always referred to the Martians as “my people”. As part of this realization he also finds/admits that the Martians had wanted him to go to earth so they could better grok humanity, before deciding whether or not to destroy Earth as they had already done with “the fifth planet of sol”. He had subconsciously been working towards this goal as he hadn’t been considering himself a human, after his realization he becomes confident, charismatic… and free.

In the second half of the book Michael is usually in the “dominant” position; he is the one making the decisions, its “his” house/church. The only person we see giving Michael advice near the end is Jubal whom he calls “father”. Before going out to meet the mob Mike confides his doubts to Jubal. He tells Jubal that hes not completely sure that what he’s doing is right or if it will be successful. This shows that despite seeming all-knowing and god-like he is still human. He yearns approval for what he is trying to do from his “father”. Jubal assured him that his new faith wouldn’t spread like other new religions, it would spread thru Darwinism. Those in the/a “nest” are significantly healthier, more intelligent, have more self control, can use telepathy, and telekinesis, (they also have sex a lot and the woman can choose whether or not to get pregnant) so they are bound to steadily expand by out-living those yet to join.

Theology is a huge theme in Stranger. Many pages are debates/discussions between Jubal and; Ben, Duke, Mahmoud, Jill, Anne, or Mike. Jubal cut’s to the heart of the question ignoring or disqualifying ignorance,  social acceptance (which he would say is essentially the same thing), and other irrelevancies. When Ben refused to join the nest on the grounds that they practiced mass polygamy, Jubal made it clear that you cant  question polygamy on moral grounds without questioning marriage in general, the only potential issues specific to polygamy are logistical. The Fosterite has become the largest church in the world  create many interesting questions about religion. Their aggressive and capitalist methods such as having casinos (gambling, booze, strippers, and what not) in the front of the church, make the non-Foserite characters view them with distaste however Jubal “a devout agnostic” argues that, if they have higher attendance, more political influence, and more funds, than perhaps their just really good at being an organized religion. Mike’s interactions with the Fosterites vary widely, when he is first invited to a service by the bishop, Mike agrees because he want to see earths Old Ones. However when the Bishop takes him into a room alone to, presumably to press him into joining, Mike removes the Bishop using his telekinetic powers after sensing a great wrongness in him. However when Mike starts the Church of all worlds he incorporates parts of the Fosterite church’s methods, namely the different levels of followers. In the end it was the Fosterites who were accusing Michael of being a heretic, the antichrist, or Lucifer. It was their members who burned down the nest, and formed the majority of the mob who killed Michael in front of the hotel. The very last scene is of incredible significance. Arch-angle Foster informs his assistant that he’s leaving and Mike will be his new boss. “He left, and Mike pushed back his halo and got work. He could see a lot of change he wanted to make-”

Stranger is a book that made me think like no book had made me think before. It brings up great concepts from politics to theology but at the heart of it all is human nature. At first I thought Stranger was working with a common cliche that is somehow considered “deep”: Human’s are cruel, ignorant, stupid creatures, who do everything wrong. This idea is expressed in many stories to various degrees. Early on many “flaws” in human nature and society are brought up in Stranger. However later on in the story, and especially after Mike’s realization, Mike begins to see the greatness in humanity. Emotions, far stronger than those of any other being. Art and music made with passion and freedom. Michael began the Church of all worlds so he could teach some the best aspects of Martian society to his fellow man. We all shape each other and the world with our lives. Thou art God.