The progressive era in American history helped three major groups of people: 1. Freed blacks, 2. Labor progressives 3. Women’s suffrage.   Many Americans thought they were better than others.  Most whites had power or greater rights over blacks, but the progressives wanted equality with men/women and whites/blacks.

Some women during this movement were Jane Adams and Ida Tarbell. They urged Americans to think hard about what democracy meant. During the progressive movement, women, who were also abolitionists, couldn’t vote and they were told they had to stay home and take care of the children because it was their “job” as women.

Women started to be able to vote when the 19 amendment was passed in 1920. Laws were passed during the Progressive Era to protect general welfare. There were “muckrackers”who were journalists who exposed social ills and wrote about the unsafe working conditions that were seen during the progressive area. This shows how unfair laws were, and how much poverty was seen.  Below is the cover of a famous book during the time that exposed poor working conditions and lack of regulation over the meat packing industry.  Upton Sinclair was a “Muckraker” who wanted improved working conditions and consumer rights. 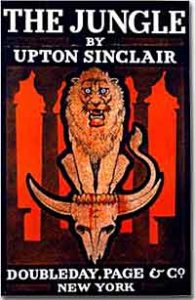 Booker T. Washington wanted training in jobs for black Americans and WEB Debois was all political as he founded the N.A.A.C.P. They both wanted black rights. The progressive era was marked by a movement to correct injustice.  The main problem that was often ignored in the South was blacks not being able to vote, and black rights under Jim Crow segregation. Organizations like the NAACP fought to help blacks get their rights and W.E.B Dubois believed they should always keep fighting for their rights. It was lawyers from the N.A.A.C.P. like Thurgood Marshall who fought for desegregation in Brown v. Board of Education in 1953.

The image below shows President Teddy Roosavelt “Raking the muck” of congress. President Roosavelt favored progressive reform that would help the workers in the early 1900s.