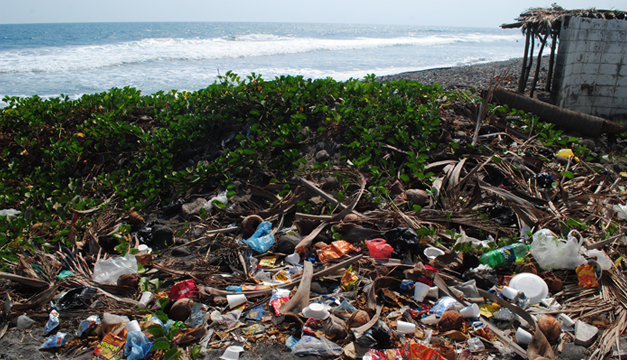 The beaches and water of El Salvador have a problem.    During spring break most of the people go to the beaches to swim and enjoy.  This crowd of people bring their own food and bottles to drink but when the day is over they don’t pick up the trash.  They leave all the trash that they bring.  They don’t think about the environment  and the that consequences that they can have. People must think about the animals from the sea or different type of animals that are living in the earth.  We must also remember that what we do now affects our future.

This is one those problems that we have in our country that we don’t recycle the trash.  That’s how most lakes and rivers get contamination.  The pollution is a big problem and difficult to solve but if every single person recycled the trash should be more easy for the development of the environment.

There is some hope because now we in El Salvador are creating programs to pick up all the trash that the people dropped on  the surface of all the beaches.   I think that this a good start.  It is very important that we take care of our environment because when we harm the nature we harm ourselves.

-“Poor people are the ones who tend to end up drinking contaminated water from natural sources,” says Andrés McKinley, an expert on water and mining at the Central American University José Simeón Cañas (UCA) in the capital city of San Salvador. “When large-scale industry is located near poor or lower-income communities, their overuse of water from subterranean aquifers leaves those communities without adequate water resources.”

-According to the Salvadoran Foundation for Economic and Social Development (FUSADES), nearly a quarter of the population in rural areas has no access to running water either in their homes or at public taps.

Gangs are impacting the use of water given that most of these water sources are in remote areas allowing for gangs to commit robberies, rape, and other attacks.

This is one of the problem that we have in our country El salvador.  The gang members are governing a lot of areas like villages and they have all the control of these places that’s why most of the people have fear.  This fear keeps us from solving other problems like clean water.

Most of the aquifers in the coast and central parts of El Salvador have receded, meanwhile, more than 90 percent of surface water sources in the country are contaminated.

Most blame is going to runoff from industry and agriculture that there is water that cannot be consumed because it is untreated.

Many factories try to save money by using rivers to throw all the waste that they don’t need.  The rivers get contamination like fertilizers and chemicals that come from industry and farms.

In rural villages in El Salvador, there are 600,000 people that do not have access to driving water, and there are hundreds of thousands more that experience limited access.

Although Central America is very rich in water, El Salvador is small relative to its population size and this  puts its thinning annual water supply per capita as dangerously close to falling short of demand.

One of the privileges that you should have if you live around areas of cities with tax money is clean water but if you live in rural villages you don’t have all this privilege. There are thousands of  people that don’t have access to clean water and don’t have the education to keep the water supplies clean.

The following goals for Sustainable Development published by the United Nations in 2015 will help the people of El Salvador and the world to improve their situation by 2030.  https://www.globalgoals.org/ 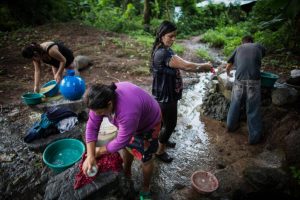 Promote Universal Understanding of Sustainable Lifestyles
By 2030, ensure that people everywhere have the relevant information and awareness for sustainable development and lifestyles in harmony with nature.    GOAL 12.8
Conserve Coastal and Marine Areas
By 2020, conserve at least 10 per cent of coastal and marine areas, consistent with national and international law and based on the best available scientific information  GOAL 14.5
Conserve and Restore Terrestrial and Freshwater Ecosystems
By 2020, ensure the conservation, restoration and sustainable use of terrestrial and inland freshwater ecosystems and their services, in particular forests, wetlands, mountains and drylands, in line with obligations under international agreements  GOAL 15.1