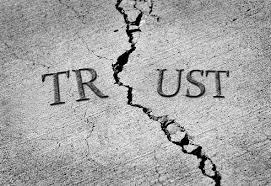 In American Society, it has become more and more “Mankind are not held together by lies. Trust is the foundation of society. Where there is no …trust, there can be no society.”
— By Frederick Douglass in “Our Composite Nationality“, 7 December 1869.

distrusting to the authority and government in America. Their was a social survey taken and almost half of Young Americans distrust the government or are active “dissenters”. A shocking 46% of Young Americans don’t have belief in the justice system and U.S. Government. If you surfed the internet, it’d be very easy to find examples as to some reasons why there is distrust in the government. Some examples might be police brutality, The Snowden hacking situation, security issues such as the government tapping phones. , immigrants being separated from their families and the innocent kids who came to America with their Immigrant families being put into jails/camps.

These are just a few of the bigger reasons why Americans aren’t able to trust the unjust and shady Government. As an example there are stories of how Ronald Reagan flooded ghettos in America with crack cocaine in the 1980’s to support Nicaragua. Although they may not have really created or flooded America with crack cocaine, Young poor Americans did this themselves cooking and creating crack cocaine. A lot of people blame Freeway Rick Ross for flooding South Central LA with crack, but really the government were the people making tons of money off of using Latin American citizens to distribute large amounts of cocaine to poor Young Americans, like Freeway Rick Ross trying to make a quick buck. All to support Nicaraguan Contras in Latin America who were in the midst of a war but didn’t have the supplies and money to be able to fight back against being overthrown. So Ronald Reagan took it up to himself to keep it a secret that The United States government was involved in Drug Trafficking and having Latin American citizens move to the U.S. to supply drugs to support his country back in Nicaragua with money as all the proceeds were going there.

Then to make matters even worse, Freeway Rick Ross had gotten out of prison trying to better him and his community, but the Government wanted to have him set up for failure giving him numbers and a deal he couldn’t turn down. His supplier Danilo Blandon was caught and charged with conspiracy to possess cocaine with intent to distribute, he took a plea deal to cooperate with the DEA in exchange for a substantial sentence reduction. He was released and trying to set up Rick Ross to be imprisoned for purchasing a large amount of cocaine from Blandon at a very low unbeatable price. Although Rick Ross had just gotten out of prison he was pressured by Blandon to purchase the cocaine by an appealing price that was so low I don’t know who would refuse. Freeway Rick Ross was charged to life in prison after being caught with 100 kilos of cocaine, after learning how to read in prison he found a loophole in being able to be released from prison after serving 20 years.

For a full summary of FREEWAY: CRACK in the SYSTEM : https://www.imdb.com/title/tt35

We no longer trust each other, or America. It’s our core problem.