TV Debates; From Information to Entertainment 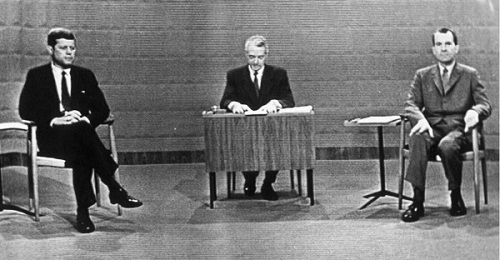 TV Debates from 1960 to 2016 are similar in the way that they try to inform the people of the candidates’ plans but it seems that they have become less informative over time.  In 1960 the debates were more respectful than now. We can see a clear example in the most recent 2016  debate where Trump interrupted Clinton all the time when she was speaking and he stood behind her as she was speaking. On the other hand, Nixon and Kennedy had respect for which other when they were speaking. Another example of similarity is that they always try to get more voters by saying that they are going to change the country with their plans.  Elections have always been about change but how has TV really changed the process?  Since 1960 more Americans are looking for entertainment from their candidates.  It’s interesting to know that Ronald Reagan was elected as a former Hollywood actor and Donald Trump used to be a reality TV personality.

TV may have changed the way voters judge candidates but Americans have always had propaganda in the election process. Richard Nixon used plain folks, and  coat-tailing strategies because he tries to explain things in plain language and he is trying to ride on the success of President Eisenhower as his Vice President. However, Kennedy used propaganda strategies too. He used guilt by Association against Nixon by saying that “I am not satisfied” with the present moment.  By using slogans and emotion Kennedy proves to be more successful.

Listen to 3 minutes of the most recent debate below; what did you hear?

During the minute 30 until minute 33 both candidates (Clinton and Trump) were discussing about the health insurance and “ObamaCare”. Hillary was defending  the plan of her Democratic companion. Trump, on the other hand, was arguing to rip up this plan. Even Donald  Trump used a quote of Bernie Sanders where he said that Hillary Clinton is a bad judge. It was referring to the idea of Hillary wanted to save this program. During these three minutes the strategies that they used are: Guilt by Association and Coat-tailing.  Hilary was guilty by association according to Trump but she wanted to credit President Obama and ride his “coat  tails” of success.

When comparing 1960 with 2016, Mr. Kennedy and Mr. Nixon were more respectful than their modern counterparts. This debate has the distinction of being historic as this first of its kind in US history. It already meant something important for the people.

In the end, I’m not saying that this debate is better than the modern because if you ask me in different terms like “which one this the most entertaining?” I am going to the say the modern.

The final debate is October 19th at 9 pm.