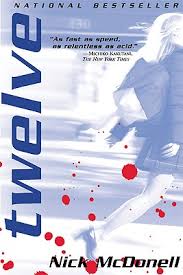 Twelve is a fast paced novel about a young, straight-edge drug dealer who lives and sells in New York City. The novel tracks White Mike throughout the city and all of the outlandish individuals that he comes in contact with, mainly through selling drugs. Everyone that White Mike sells to are rich kids that live in big houses and have parents that are never there, basically the embodiment of stereotypical rich kids.

In my opinion, “Twelve” refers to a new drug that is being sold by the antagonist of the story, Lioinel, who ended up being the killer of White Mike’s cousin Charlie, but the drug Twelve is only mentioned three or four times throughout the novel. Anytime its mentioned, it’s only by one character, Jessica. I’m not sure why the author, Nick McDonell, decided to call the whole book Twelve if it’s only a small part of the book. The main character, White Mike, doesn’t even sell the drug!

This book has a lot of young kids making stupid choices with drugs, sex, and parties, which I’ve seen a lot in my real life. The preparation for the parties from the ‘unpopular’ kids is such a real thing, but then he ends up running with the wrong crowd and getting himself killed. Jessica ends up selling her body to pay for the rest of the Twelve, which I’ve seen girls do who I used to go to school with. Nick McDonell captured the teen party scene almost perfectly in the behaviors of the kids, what goes on at the parties, and the thought patterns of each of the characters. I think since McDonell was only 19 when he wrote Twelve it gave him an advantage since he has probably seen everything he wrote about in real life.

The ending of Twelve is so shocking and I’m not sure why McDonell chose to end it this way, or what the prupose of this book was. Maybe since the ending was so tragic and basically everyone that we followed throughout the book died, McDonell was trying to show that everything can go south so quickly, even if you have everything. It scared me because I have been to parties like the one described at the end of the book, and I never thought that I could be killed instantly, just because I was at some stupid party. It makes me think about my choices more, so I won’t fling myself into situations where I’m in danger. I think that’s what McDonell wants to say as well.