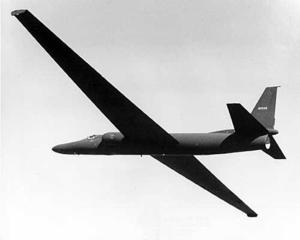 In 1960 America was actively spying on the Soviet Union. The spying tool that they used was called the U-2 aircraft also called the “Dragon Fly”. It was flying at a high altitude of 70,000 feet / 21,000 m giving the U.S. its first detailed look at the Soviet military facilities. Below is showing a map where a flight plan where they spying over communist territory. The Soviets were aware of the flights because they could spot the spy planes on radar. However the U-2 aircraft was unreachable by both Soviet jets and missiles. If everything had gone according to plan the nine hour flight would have taken pilot Powers from Pakistan to a landing zone in Norway. Instead the Soviet surface to air missile exploded near his plane, which caused it to drop to a lower altitude. A second missile hit the aircraft directly then Powers and his aircraft began to fall from the sky. 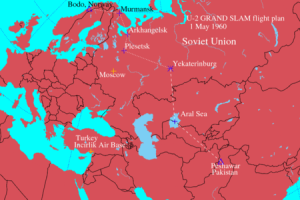 The U-2 spy can be compared to the Drone because it is American technology that spies on foreign countries. The drone is actively used today in the war on terror. Pilot Gary powers was sworn to secrecy and if he got caught he had a needle filled with poison. The human element adds more risk and responsibility. The USSR used the capture of powers as a form of propaganda. Today there might be less risk with Drones but secret Drone acts make people question America’s position on human rights.

Above is a picture of a U.S. Military predator Drone.

Below is a picture of the New York times showing headlines from the American space race and the Gary Powers trial in Russia.