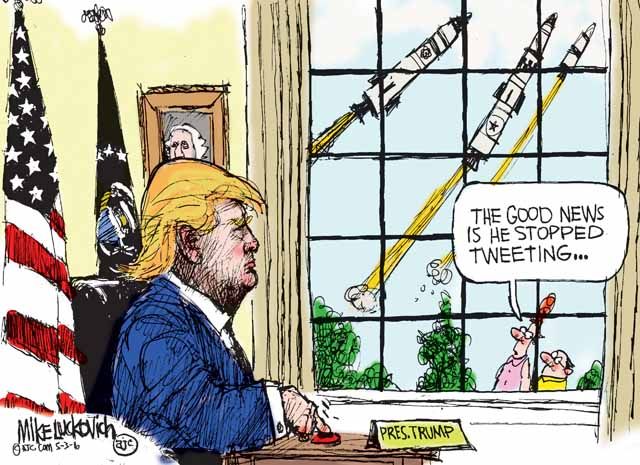 As result the U.S President Mr.Trump has said  he would act over the Syria dictator  and the Russian government to stop the use of chemical gas to kill people. Russia wants to be seen on the side with the United States to keep peace in the world but they continue to support this terrible dictatorship for selfish reasons.

However, now that this happened in Syria other countries like the U.S think that Russia could have known about the chemical gas attack in Syria but that Vladimir Putin supported the Syria dictator instead of trying to stop attacks with chemical gas on innocent civilians. This blames Russia for being part of the use of chemical gas to kill humans. Moreover, this affects the relations between the United States and Russia.  Russia wants to have some control in the middle east by supporting the Syria’s dictator but they tell the world they are fighting terrorism.

President Trump had a ready retort to a Russian threat to shoot down any U.S. missiles in Syria: “Get ready Russia, because they will be coming, nice and new and ‘smart!'”

Trump tweeted, “You shouldn’t be partners with a Gas Killing Animal who kills his people and enjoys it! “Our relationship with Russia is worse now than it has ever been, and that includes the Cold War,” Trump said. “There is no reason for this. Russia needs us to help with their economy, something that would be very easy to do, and we need all nations to work together. Stop the arms race?”

Trump unleashed his counter-threat hours after Russia’s ambassador to Lebanon warned that his country will shoot down any U.S. missiles fired at Syria in a punitive strike on the Damascus regime over its alleged use of chemical weapons. In response, Russian Foreign Ministry spokeswoman Maria Zakharova wrote on her Facebook page, “Smart missiles should fly towards terrorists, not the legitimate government which has been fighting against international terrorism in its territory for several years,” according to a translation by state-run Tass media.
https://www.npr.org/sections/thetwo-way/2018/04/11/601419856/russia-threatens-to-shoot-down-u-s-missiles-target-launch-sites-in-any-syria-str

India denounces use of force in Syria, asks all parties not to escalate tension

Emmanuel Macron: France persuaded Donald Trump not to give up on Syria

US to Impose Sanctions on Russia Following Syrian Chemical Attack