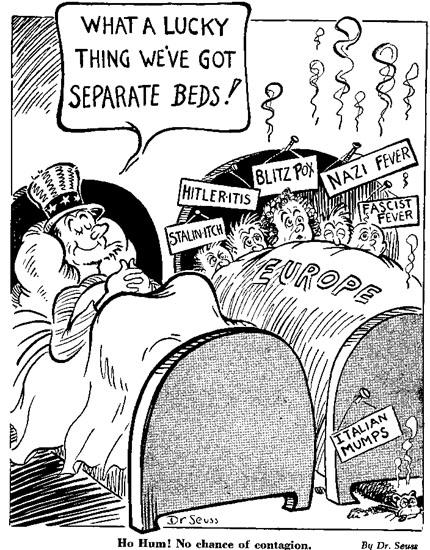 This political cartoon depicts a time when the U.S. did not include themselves foreign affairs. The foreign policy at the time is called Isolationism, meaning to separate oneself from others. The U.S. where distrustful of the other countries and was scared Socialist ideas would spread into the U.S. After WW1, the U.S. refused to join the League of Nations because the people did not want to be entangled in another European War. During the 1920’s, the U.S. shut its doors to most immigrants and also set high tariffs to keep out foreign products. To the few countries that where still allowed immigrants, the U.S. put into use an immigration quota that limited the amount of immigrants. The isolationism policies of the U.S. where one of the main causes of WW2.

This cartoon depicts Isolationism perfectly because it shows the U.S. separate from all the European problems and diseases  because the U.S. closed its borders to foreign countries. The isolationism policies where one of the main causes of WW2 because it created tension between all of the countries, even among the allies. Europe was unable to pay off war debts to the U.S. because the high protective tariffs at the time that limited the amount of European goods sold to the U.S. As a result, both Europe and the U.S. turned to Germany and demanded money for reparations that the Germans could not afford to pay. Germany’s economy was at the brink of collapse at the time, which acted as a basis for Hitler to take over. 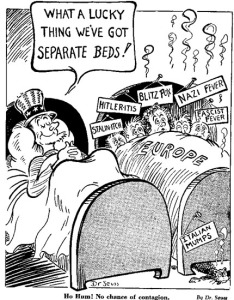