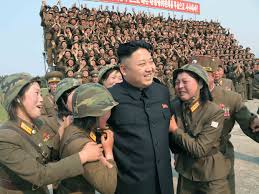 Marathon runners who were wanting to participate in a marathon held is North Korea are not allowed to participate. North Korea has barred foreign participants from The Mangyongdae Prize Marathon in April. The marathon is to be held in the capital, Pyongyang. Officials have placed a ban on foreign runners, professional and amateur alike.

The ban was placed due to the citing fears of the spread of Ebola. Koryo Tours, a Beijing travel agency that specializes in trips to the anti-social country was told about the decision by the North Koreans. The travel agency has canceled around 465 applications they were in the middle of processing for the spring race. Last year the Mangyongdae Prize Marathon was opened to foreign amateurs. Only 30 foreign amateurs ran the full marathon that time.

Koryo had mentioned they had brought 125 runners to the event. The even included 10 km and half-marathon races. North Korea had closed its borders to international tourists in October 2014 over Ebola worriment. The country has also done this before, in 2003 they closed borders due to the SARS epidemic.

The travel agency still intends to host a 10km charity in Pyongyang in the summer. For the “more serious runners” the company will host the first half marathon in the Mount Paekdu area in August.

I think that it’s good that NK closed its borders due to an Ebola scare. That’s protecting its people by doing that. However what if this is just a front to hide conditions? Everyone has heard that the conditions in NK are pretty horrible, human rights violations, torture, famine, and reports of cannibalism, so maybe the ban is like a front to keep things from getting out about NK. NK has been know to be a dictatorship and the country doesn’t fall under being democratic one bit. I also think that the ban on foreign runners is also because NK doesn’t want outsiders competing and winning against their own people.