US To Store Heavy NATO Weapons in Poland

The US military has been conducting massive drills with NATO allies in eastern Europe because of Russia`s involvement in the Ukraine conflict. Russian officials say this plan may have major consequences and could result in mass destruction. The US has confirmed only that it is to send an armored brigade of up to 250 vehicles, including tanks, to Germany to support its NATO allies. The three Baltic states also have agreed to store the US heavy weapons. and US Secretary of Defense Ashton Carter will decide in due course whether any of the vehicles will be deployed in any other European countries.

Reports say up to 5,000 NATO troops could be equipped with the weapons set to be stored in eastern Europe. It would be in position for a NATO rapid reaction brigade; agreed at a NATO summit last year, which could deploy at short notice. The White House and Mr. Carter, The US. Defense Secretary, still have to approve the heavy weapons storage, and no precise locations have been named yet. 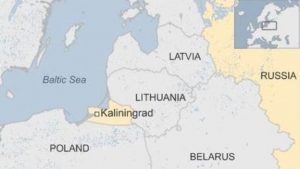 Map of where the weapons are too be stored

This plan seems like an echo of the Cold War back when the Soviet Union was around and there was much tension between NATO and Russia. NATO or the North Atlantic Treaty Organization was originally created to protect countries from soviet invasion. America has been a large factor in this because of its military strength and large arsenal of heavy weapons. The countries of Latvia, Lithuania, Poland, and Belarus are all ex-soviet countries and they are the most worried about Russian military action, which is why NATO is stepping in to help.