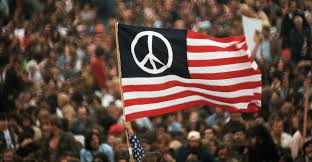 In the 1960’s, there was an outburst of protests across America in opposition of the Vietnam War. They began in 1964, the year of the incident that increased American involvement in the Vietnam war, the Gulf of Tonkin, occured. Protesters of the war focused mainly on peace, the amount of casualties that could have been avoided if we hadn’t gone, and the huge amount of money the war was costing the U.S. . Many were considered “hippies” or unpatriotic for their actions and ideals. They protested by participating in peaceful marches, or refusing to be drafted.

As if there wasn’t enough protest in the U.S., in 1968 70,000 North Vietamese troops launched surprise attacks on more than 100 cities and towns in South Vietnam. These attacks led to extreme casualties to all involved in them, including U.S. troops, but North Vietnam ended up being victorious. At this point, many more Americans realized that they were fighting a losing battle and the amount of casualties was not worth the disapointing outcome. In my opinion, we should have not entered the war with Vietnam in the first place. It was not our business, the spread of communism would have not made a huge impact on us, and we could have saved a lot of lives/money. Below is a chart showing the cost of recent major US wars in the billions of dollars.  Vietnam was one of the longest and cost the country $738 Billion.

Many people in our generation have living relatives that were involved in the Vietnam war and protests, including me. My grandfather, who I affectionately call “Papa Man”, was a young man while the Vietnam war and currently lives in South America. Being a young male during this period meant that you were drafted into the military, whether you wanted to be involved with the war or not. My grandfather refused to be drafted and went to several protests to defend his freedom. He often went to peace rallies with Tupac’s mom! His activism has had a huge effect on my personal opinion on this topic.