A vote for Ralph Northam is a vote for gun control. 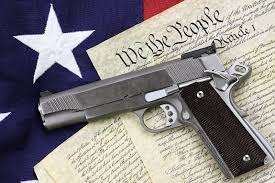 The two progressive groups that have been spending a lot of time to elect Democrat Ralph Northam as Virginia’s next governor, announced Monday that they would “ramp up” their spending with just two weeks until election day. The gun safety fund is donating an additional $400,000 to Northam, $300,000 to democratic attorney general Mark Herring’s re-election bid and $100,000 to democratic lieutenant Justin Fairfax. They decided to take action in gun control after the tragedy where a gunman killed over 58 people in Las Vegas. Northam wanted to ban all assault weapons  and high capacity magazines. He also wants a background check and restore Virginia’s one-gun-a-month purchase limits, which republicans had over turned. There are many ways people can take this, either they will pass the gun law or they will keep it how it is. The government should of taken more action when other tragedy’s had happen before including guns being sneaked into buildings or authorities not watching citizens close enough.

In my opinion I believe that they should start becoming more strict when it comes to gun laws. The government lets 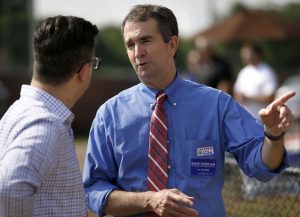 people get away with the act of violence by not being strict enough when they see a suspicious act. For example, when the Las Vegas shooting occurred people had “no idea” about the shooter. He had 23 weapons in his Las Vegas suite and thousands of rounds of ammunition, but yet the hotel just so happened to not know the shooter carried 23 weapons to his apartment. There is more to this tragic incident than just some guy that decided to kill 58 people and injured hundreds. The government needs to play a bigger part in the gun laws and make it more strict. Many people have died and tragic incident have happened because people took guns into deadly situations.

Ralph Northam is a better candidate to vote for because of his stance on gun control. He is pro gun control and he thinks that, “We have to act now with universal background checks, an assault weapons ban and smaller clips.” With a candidate like this in office will be a good motive for ending the violence caused my guns. It will limit the amount of crime and bad people with guns, eliminate the next tragic incident such as the Las Vegas shooting, or the Sandy Hook elementary school shooting, and create a safer society.